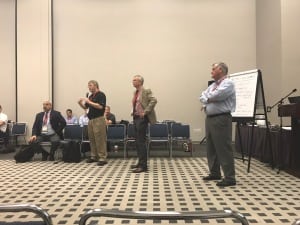 Managing load-sharing controls for compressors was one of several topics explored by a group during several group discussions that took place on December 13 at the Turbomachinery Symposium in Houston. While the discussion was prompted by a participant’s question about how to best manage load sharing, it also touched on its benefits and restrictions.

Load sharing is used to maintain an equal throughput flow (or capacity) through multiple compressor units, which are connected to common suction and discharge lines. Load sharing is typically integrated as a function block into a programmable logic controller (PLC)–based unit control system, though stand-alone controllers are also available. Process controls then have the key function of distributing the overall load between compressors while controlling a shared process parameter—suction header pressure, discharge header pressure, or total header flow, for example. But while load sharing is often deployed to boost efficiency, it is a complex process that can be challenging, participants agreed at the discussion on Wednesday.

The discussion shed light on load sharing in parallel or as a series — each configuration has its own merits. In different ways, many participants called attention to the consideration that controlling a compressor network critically required an overall evaluation of the network as well as performance of individual machines.

While the discussion began with an assessment of methods to determine adequate flow and estimate how many machines would be needed for a particular condition, it quickly turned into a debate over whether load-sharing controls are necessary for machines running in parallel. For example, one participant posited that knowing machine curves was integral for load-sharing capability, while another contended that real-time curve mapping wasn’t easy to do because some vendors don’t provide that capability.

Participants also shared their preferred strategies for load sharing. For example, someone contributed that surge protection and process efficiency can be maximized by operating them equidistant from their surge control lines. Another noted that it wasn’t practical to run compressors at the same flow rate or rotational speed, because small differences in surge limits could prompt one compressor to surge or go into recycle before others. And yet another participant cautioned against “one-size-fits-all” approaches, pointing out that the “mechanics from a systems’ point of view” associated with parallel air compressors are different from those for centrifugal and reciprocating compressors.

Topics were determined as participants introduced themselves and revealed a pressing question or concern about compressor controls they wanted the group to discuss (photo).

Related Content
Digital Tools To Move Turbomachinery Into the Future
As with many industries, turbomachinery is experiencing a shift toward all things digital. The two main results of the digitalization…
Game-Changing Supercritical CO2 Systems Are Closer To Commercialization
Supercritical carbon dioxide (sCO2) cycles—which are inching closer to commercial applications for waste heat recovery, concentrating solar power, nuclear, and…
A Focus on Maintenance and Analytics at TPS
Following an introduction from outgoing Turbomachinery Lab director Dara Childs, Jody Elliott, president of domestic oil and gas at Oxy…
This machinery-protection system provides early indication of fault development
The AMS 6500 ATG System is a standalone machinery protection solution that also allows users to cost-effectively introduce prediction monitoring…
Updated design software with new compressor-casing feature
This company has released Version 8.6 of its Agile Engineering Design System software, an integrated suite of computer-aided engineering (CAE)…