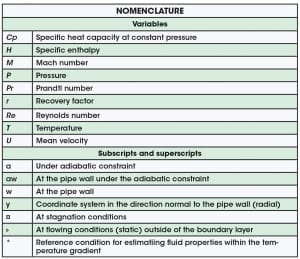 In high-velocity gas flows, such as those that may occur within the discharge piping of a pressure-relief or depressurization valve, the temperature experienced at the wall of the pipe through which the gas is flowing can be much higher than the flowing stream’s “static” temperature. In fact, the wall temperature approaches the stagnation temperature, which is the temperature that would be obtained if the fluid were brought adiabatically and reversibly (isentropically) to rest.

Experimental work in aeronautical engineering has established this effective adiabatic wall temperature, and correlations have been proposed to determine the “recovery factor” as a function of the Prandtl number (Pr) of the fluid. It has been found that the adiabatic wall temperature is about 90% of the difference between the stagnation and static temperatures for a turbulent gas having a Prandtl number of 0.7, which is typical for many gases. When performing heat-transfer calculations between the pipe and the gas, or when specifying temperatures for piping material selection, this recovery factor is important, and should be accounted for.

Recent investigations into the potential for fluid temperatures to exist below the embrittlement temperature of relief-valve discharge piping have shown that low-flowing temperatures can exist for a wide variety of systems, including: flashing liquids or two-phase flow; autorefrigeration and Joule-Thompson cooling in response to pressure drops; and high-velocity gas flow [1].

There is evidence that some systems exhibiting these behaviors have resulted in metal embrittlement and failure. However, there is an apparent lack of evidence supporting embrittlement failures involving high-velocity gas flow, and there is some suspicion that the flowing temperatures experienced in high-velocity gas flow may not be realistic, as evidenced by a common refrain — “if the gas was getting this cold, I would be seeing ice on the pipes.” Some attempt to reconcile this anecdotal evidence with the “intuition” that the pipe (or vessel) wall temperature can approach the bulk fluid temperature given a long enough pipe and a low enough convective loss to ambient from the pipe is needed. This article provides guidance in determining the wall temperature for high-velocity gas systems.

Before attempting reconciliation of the various notions related to wall temperatures, it is useful to recall Prandtl’s theory of the boundary layer, which envisions a small layer of fluid close to the pipe wall in which the viscous forces are significant due to the velocity gradient. However, outside of this layer, the core fluid flow approaches that of an inviscid fluid. The velocity gradient is established by the known boundary condition of zero velocity at the wall, as real fluids will “stick” to the pipe wall, and the maximum velocity is approached in the center of the pipe. For turbulent flow, this boundary layer consists of a laminar sublayer, a logarithmic outer layer and a buffer zone of some nominal thickness that transitions continuously between these sublayers [2]. The resultant velocity profile for a constant-area pipe in fully developed turbulent flow is shown in Figure 1. All variables, subscripts and superscripts presented in the equations and figures are defined in the Nomenclature section.

It is also useful to remember that the majority of resistances to flow within a pipe — the frictional losses themselves — are actually due to effects of this boundary layer, and that the friction factor is used as a means to determine these losses as a function of the mean velocity in the pipe. In addition, while a rigorous analysis of the energy and momentum balances that includes the boundary-layer effects would find that a slight modification of the terms would be required for turbulent flow (for instance, a momentum-correction factor of 1.018 for the logarithmic-law profile in turbulent flow), these correction factors are commonly ignored in engineering calculations. They tend to cancel out from mathematical expressions, and are minor when compared to the loss terms [2]. As a result, the typical energy and momentum balances as employed in engineering hydraulic calculations are still valid, even when recognizing the actual velocity profile. 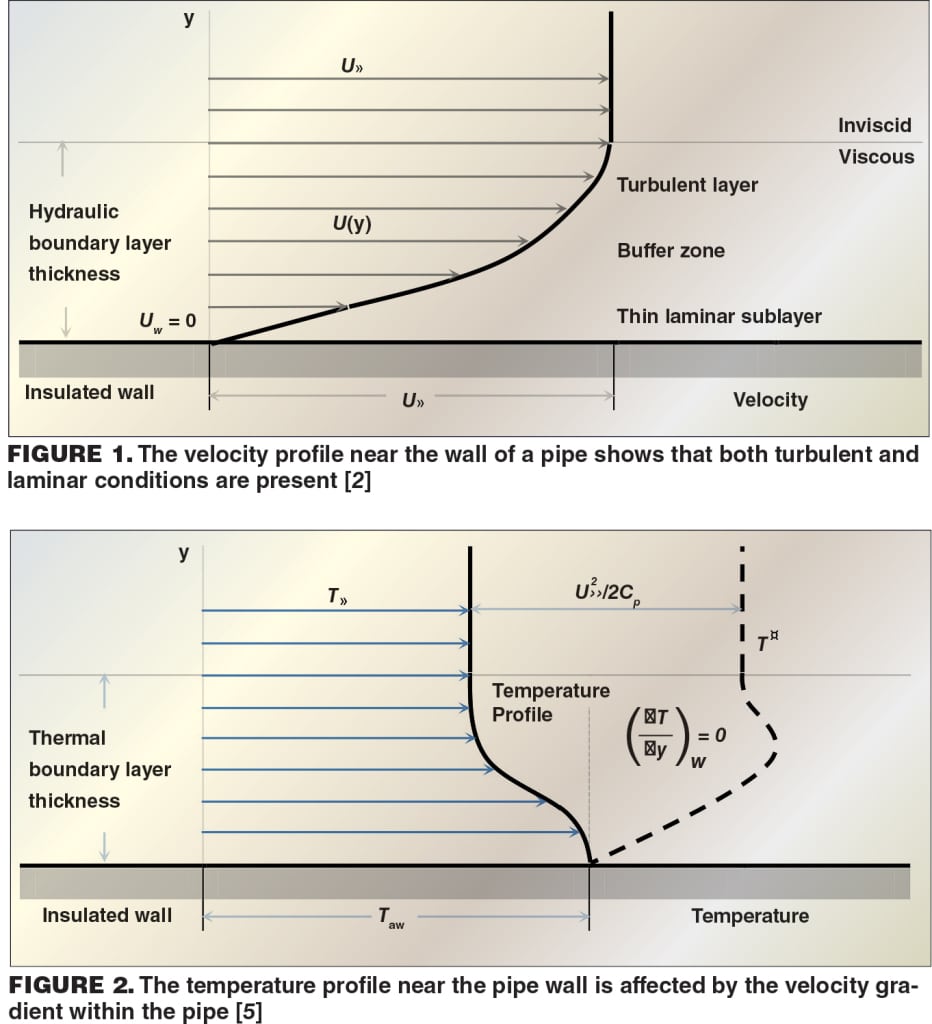 The subscripts aw, », and ¤ are for the adiabatic wall, static and stagnation temperatures, respectively. The recovery factor, r, has been found to be dependent on Pr, and for 0.5 < Pr < 5, the recovery factor is estimated as shown below in Equations (2) and (3) for laminar and turbulent flow, respectively [3].

A detailed analysis of the turbulent boundary layer, presented by Shapiro [5], finds that the adiabatic-wall recovery factor is a function of Pr and the ratio of velocities between the laminar sublayer and the edge of the boundary layer. While admittedly, this velocity ratio is not accurately known for compressible flow, it does indicate the boundaries for r when Pr < r < 1. Development of a more accurate expression for the recovery factor is further complicated by the difference in the hydraulic and thermal boundary-layer thicknesses. Nonetheless, Shapiro presents an analytical expression [5], which has been further developed by Tucker and Maslin [6], and shows that this expression approaches the expression for turbulent flow shown in Equation (2) at high Reynolds number values and Mach numbers less than one.

For adiabatic flow, Tw is equivalent to Taw; therefore, the reference temperature is given by Equation (5).

Further research at Mach numbers much greater than one found that an enthalpy approach (as opposed to the temperature approach) was needed. However, the present discussion is limited to flowing velocities having Mach numbers less than or equal to one.
The difference between the stagnation and static temperatures can be expressed as a function of the velocity and the specific heat capacity at constant pressure (evaluated at the reference temperature [3]), based on the fluid specific enthalpy, as defined in Equations (6), (7) and (8).

The experimental and theoretical work outlined by Eckert [3, 4] is based on high-velocity gas flow relative to flat plates; nonetheless, additional work for the now-defunct National Advisory Committee for Aeronautics (NACA) [7,8] experimentally determined the recovered wall temperatures in adiabatic and diabatic airflow in pipes at a range of Reynolds and Mach numbers. Figure 3 is adapted from NACA Technical Note (TN) 4376 [8] and shows how the recovery factors vary with changing Reynolds number values. 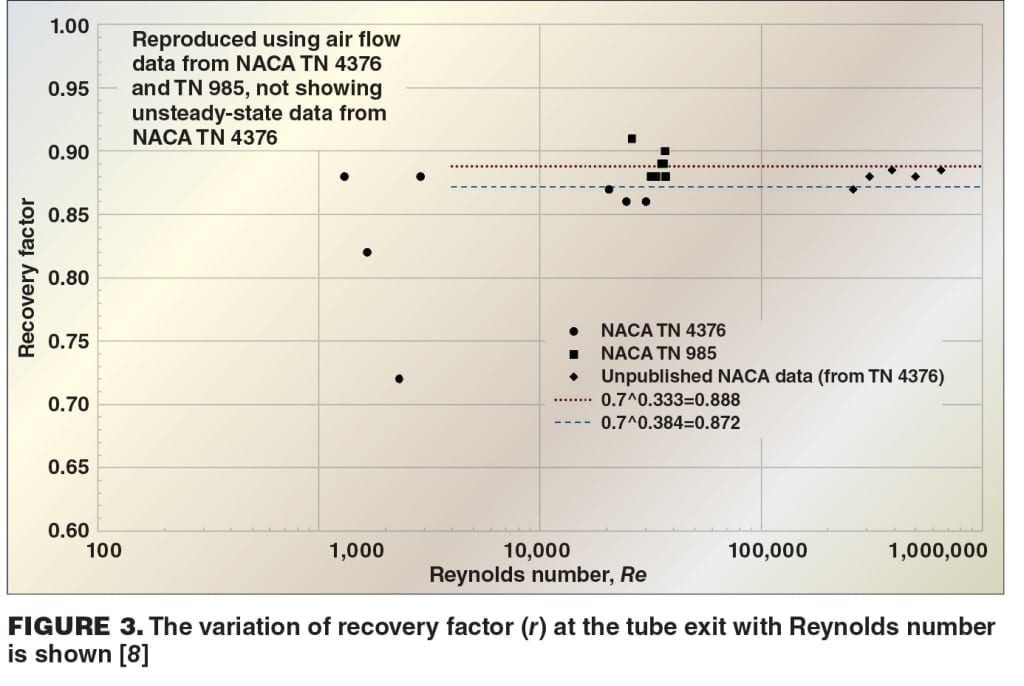 NACA Technical Note 4376 states that “In the turbulent flow region (Reynolds numbers above 3,000) the temperature recovery factor is nearly independent of Reynolds number. The average value is 0.88, which agrees with values for flow parallel to flat plates.” The experimental evidence for pipe flow was found to be in substantial agreement with the experimental evidence for flat plates.

The development of the adiabatic-wall-temperature recovery factor for turbulent flow to this point has been focused on flat plates or flow within pipes, and it is not obvious whether this analysis applies in situations involving a significant change in the fluid flowing direction, such as at an elbow or a tee. The velocity at the wall is still assumed to be zero, but the boundary layer is not developed in the same way as with flat plates at a given angle of attack or for pipes. Experimental work on the heat transfer for jets impinging on surfaces may provide some guidance in this evaluation, although much of the focus is on the effects on heat transfer when changing the distance or angle of attack between the jet source (nozzle, orifice or end of pipe) and the flat plate. In the jet-impingement studies found by the author, the discharge is directed at a flat plate having a large surface area, without restriction or redirection of the flow, so it is not directly applicable to configurations like a tee in pipe flow — nonetheless, some temperature recovery occurs. Per work by Goldstein and others [9], the recovery factor for the impingement of air on a surface is independent of the jet Reynolds number, but is dependent on the jet to impingement plate spacing.  In  this work, a minimum recovery factor of 0.7 was determined, which is the approximate value of Pr for air.

It would appear that the prudent course of action would be to use the bounds of the recovery factor depending on the goals of the analysis. For the case of the determination of the adiabatic wall temperature for use in the low-temperature estimate for material specification, the lower bound of the recovery factor would provide this estimate, as shown in Equation (9).

In addition, in the evaluation and development of the adiabatic-wall-temperature recovery factor, only noncondensable gases have been considered. It is conceivable that a vapor stream may experience flowing temperatures below its dewpoint, thus possibly condensing within the core stream. It is possible that at the wall, the shearing work and frictional heating is sufficiently high to ensure that there are no liquid droplets touching the wall, and the flow behaves as an annular two-phase flow that can be treated as a gas for practical purposes. On the other hand, it is possible that the condensed liquid droplets can contact the wall, which may result in additional cooling at the wall as the liquid is vaporized. The evaluation of the adiabatic wall temperature for high-speed condensable vapor flow remains as further work.

A practical application of the adiabatic wall temperature evaluation can be found in natural-gas processing facilities, where discharges from pressure-relief or depressurization valves may involve high-velocity noncondensable gas. Evaluations of discharge piping that are performed assuming adiabatic flow yield flowing temperatures and velocities. These flowing conditions can be used to determine the stagnation enthalpy, and thus the stagnation temperature, which can then be used in the calculation of r.

As an example of wall-temperature determination, consider the flow of 25,000 lb/h of methane at 400 ft/s within an 8-in. Schedule 40 pipe having a stream temperature of –20°F. The following steps were performed, using the equations defined previously in this article, as well as the properties of methane obtained from the National Institute for Standards and Technology’s (NIST) standard reference data program, Refprop v. 9.0 [10]: 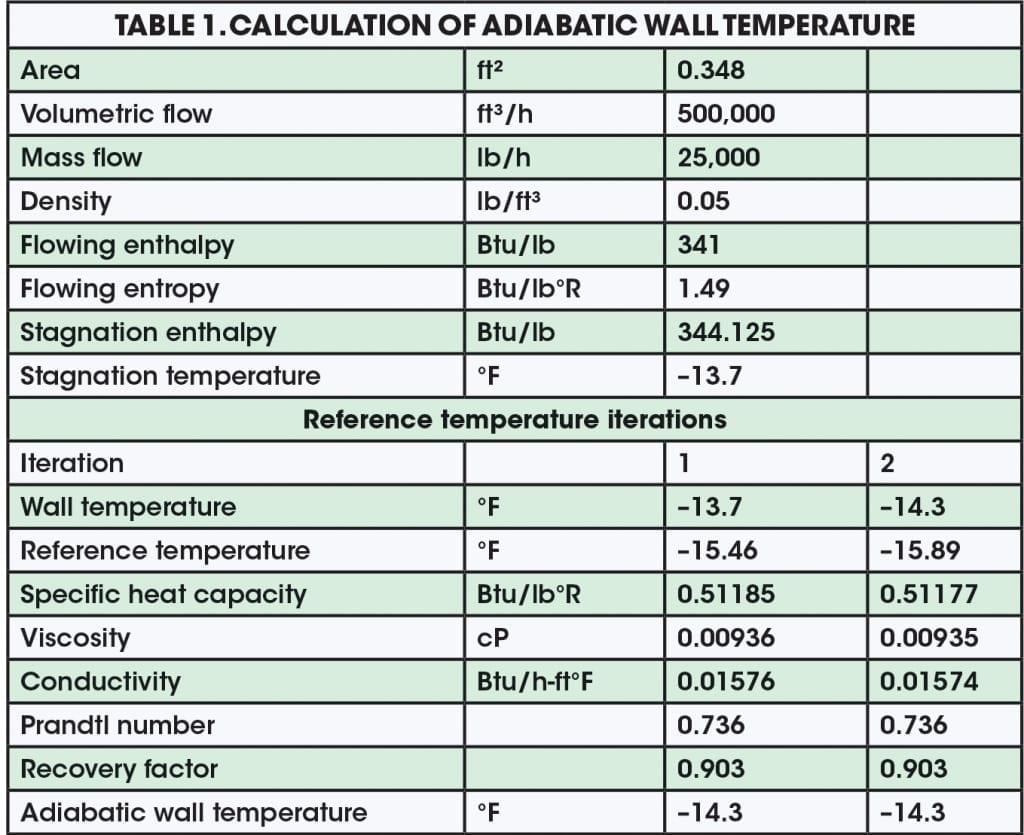 The properties of methane in the regions investigated are primarily dependent on temperature; however, there is some pressure dependence. The design chart as described above is generated for other static (flowing) pressures, using the turbulent recovery factor of Equation (3), and is shown in Figure 5. One will note the minor effects of pressure on the design charts. Design charts, along with the correlations described in this article, are effective ways of determining adiabatic wall temperature in high-velocity gases. 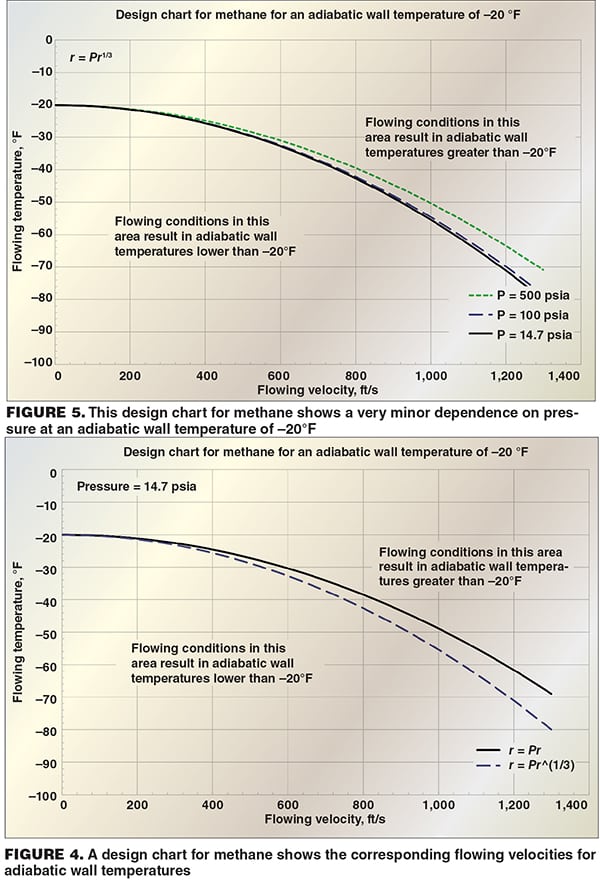 The author would like to thank Georges A. Melhem and Dale L. Embry for their review of the content of this manuscript.

7. McAdams, W.H., Nicolai, L.A. and Keenan, J.H., Measurements of Recovery Factors and Coefficients of Heat Transfer in a Tube for Subsonic Flow of Air, NACA Technical Note No. 985, June 1945. 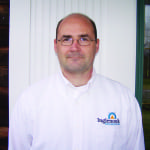 Aubry Shackelford is president and principal engineer at Inglenook Engineering, Inc. (15306 Amesbury Lane, Sugar Land, TX 77478; Phone: 713-805-8277; Email: aubry@inglenookeng.com). He has over ten years of experience in process safety management in general, with particular emphasis on pressure-relief design. Shackelford has also helped author several guidelines related to pressure relief for the American Petroleum Institute (API), the International Organization for Standardization (ISO) and the Center for Chemical Process Safety (CCPS). He has a B.S.Ch.E. from Northeastern University and holds affiliations with AIChE, NSPE and SPE.

January 2023 Bookshelf: Recently Published Books for the CPI
The following lists recently published books of relevance to the chemical process industries (CPI): The Other Side of Safety: Moving…
New Applications for Spiral-Tube Heat Exchangers
A decades-old, yet less well-known type of heat exchanger offers advantages for new and emerging applications Spiral-tube or helically-coiled heat…
Cool and dehumidify conveying air with this heat exchanger
This C Series heat exchanger (photo) replaced an older shell-and-tube design that had high operating costs, due to a 2.4…
Managing Fouling in Heat Exchangers
Fouling of heat exchanger surfaces reduces thermal efficiency. An improved understanding of fouling and the design factors that affect it…
A process for making improved composite insulation material
Hollow silica particles (HSPs) are materials of interest for thermal insulation applications because of their very low thermal conductivity, but…