In 1988, the author led a team to troubleshoot a chemical tower that was revamped to achieve a small increase in capacity (up to 4%) by increasing the tray hole areas from 8.5% to 13% of the active area. In addition, radii were added at the bottom of the downcomers to smooth the exit of liquid and reduce downcomer backup. Strangely, instead of gaining capacity, it lost 5% capacity.

Before 1992, the mechanism of vapor cross-flow channeling (VCFC) on sieve and valve trays was not recognized by the industry. The author inquired around, and everyone was telling him that the capacity reduction should not have happened. There was one lead, as yet considered unlikely, that suggested that VCFC could be taking place, a mechanism well-known in bubble-cap trays. The author was following this lead.

In VCFC (Figure 1) the hydraulic gradient on the tray induces preferential rise of vapor near the outlet and middle of the tray, and forms a vapor-deficient region near the inlet to the tray. The high vapor velocities near the tray outlet step up entrainment, while the low vapor velocities near the tray inlet induce weeping. Interaction between adjacent trays accelerates both the outlet entrainment and the inlet weeping. The result is excessive entrainment and premature flooding at the tray middle and outlet, simultaneous with weeping from the tray inlet, accompanied by a loss of efficiency and turndown. The theory was that increasing the tray open area on the trays led to the onset of VCFC and consequent premature flooding on the trays. The challenge was to test this theory. Gamma scanning was the most promising technique, but no one had experience with applying gamma scans for diagnosing VCFC, nor any idea as to how to do it. So it was decided to brainstorm together with Tru-Tec (now part of Tracerco) who had extensive gamma scanning expertise. Understanding the challenge, Tru-Tec lined up their three top experts, and together with the client’s top experts and the author, met in Tru-Tec LaPorte’s office. The meeting started about 3 p.m. and lasted for a few tedious hours. A lot of ideas and stimulating brainstorming were tossed around, but no breakthroughs. People began to wonder if there would be any resolution.

Just then, one of the Tru-Tec experts spoke. “Looks like we have brainstormed for a few hours and got nowhere. Maybe we are doing it all wrong. So let me suggest another way.” Then he continued, “Not far from here there is an excellent Mexican Restaurant called Don Key. They have fabulous food, but what is more important, is they have an excellent beverage called Don’KeyRita. It is similar to Margarita, except that it kicks like a donkey. After one or two of these, we may get more creative and come up with a winning idea.” His motion was unanimously and enthusiastically accepted.

Not only did we enjoy a delicious meal and Don’KeyRitas, but we left with a plan that everyone was happy with — and laid the foundations to the quantitative scanning that is still used to troubleshoot channeling.

The winning idea was to scan three different chords along the flow path length, both under flooded and unflooded conditions, and to apply quantitative analysis to derive froth heights, froth densities and liquid heads. From the liquid heads, hydraulic gradients can be inferred. The details are described elsewhere [1,2]. The results are shown in Figure 2, where all the tray dimensions are drawn to scale. Tray liquid head values derived from quantitative analysis of gamma scans are plotted so that a liquid head of half the tray spacing is plotted as a point on the tray above. Zero liquid head is plotted as a point on the tray floor. 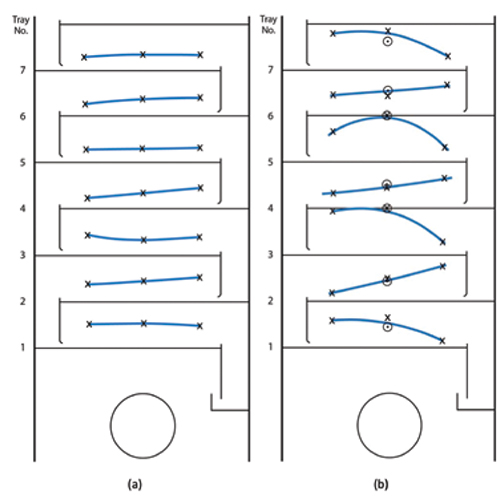 This intensification of the hydraulic gradients strongly supported VCFC as the root cause of the observed premature flood. From an unlikely hypothesis, VCFC became the leading theory. Based on this diagnosis, minor modifications were made to tower auxiliaries that permitted raising tower pressure. With VCFC inducing a premature entrainment flood, raising tower pressure reinstated the lost capacity. Prior to the modifications, raising the pressure did not improve capacity because the trays were bottlenecked simultaneously by downcomer backup (which was debottlenecked by adding the downcomer radii) and by entrainment flood.

The takeaway: When dealing with a challenging problem, a change of environment from a four-wall meeting room to a more pleasant surrounding may help usher in a creative solution. ■

Henry Z. Kister is a senior fellow and the director of fractionation technology at Fluor Corp. (3 Polaris Way, Aliso Viejo, CA; Phone: 949-349-4679; Email: henry.kister@fluor.com). He has over 35 years of experience in design, troubleshooting, revamping, field consulting, control and startup of fractionation processes and equipment. Kister is the author of three books, the distillation equipment chapter in Perry’s Handbook, and over 130 articles, and has taught the IChemE-sponsored “Practical Distillation Technology” course more than 530 times in 26 countries. A recipient of several awards, Kister obtained his B.E. and M.E. degrees from the University of New South Wales in Australia. He is a member of the NAE, a Fellow of IChemE and AIChE, and serves on the FRI Technical Advisory and Design Practices Committees.

Related Content
Tower Doctor: A Quick Diagnosis Makes a Short Assignment
Henry Kister shares lessons learned from troubleshooting distillation towers On an assignment to troubleshoot a vacuum tower for a petroleum…
Should the Doctor Believe a Flowmeter?
Henry Kister shares lessons learned from troubleshooting distillation towers Many cooling-water systems do not have flowmeters. This is a tale…
Gas Trapping Can Unsettle Distillation Columns
Operational troubleshooting guidance is provided for several scenarios involving trapped non-condensable gases in distillation towers Non-condensable gases are often present…
Sieve Tray Stability Factor Based on Efficiency Data
Using a vast collection of experimental distillation-column data, sieve tray stability, and its influence on efficiency, are explored in terms…
Sulzer to provide distillation column technologies for Dangote refinery
Sulzer Chemtech (Winterthur, Swirzerland) has been selected as the sole supplier of column internals, packings and trays for the Dangote…