Even with the best process design, the unexpected can happen. Anticipating this, rupture disks are often installed as the last line of defense against the over-pressurization of equipment used for the manufacture, transport and storage of many types of chemicals, petrochemicals, medicines, plastics, powders, food and beverages. When handled and installed properly, rupture disks are a safe and economical means to protect people, equipment and processes.

When they work well, rupture disks can provide safety against catastrophic equipment failure and personal injury from unexpected events, such as explosions, control failures, power outages, runaway reactions, external fires and blocked valves. Quite often when a disk does not work as expected, the cause can be extremely frustrating to diagnose because the ruptured disk relieves the pressure condition that caused the rupture, and the disk’s energy release can erase clues that can help identify the root cause.

Here we examine the more common causes for disk ruptures, based on our troubleshooting experience. Consideration of these causes can help identify and eliminate potential problems that could lead to a failure.

In its simplest form, a rupture disk is nothing more than a formed, thin metal membrane designed to burst at a certain pressure and temperature in order to prevent over-pressurization of the attached vessel. The disks can be machined, scored, or injection molded. Some disks act in tension like a balloon or a hammock, while others have a reverse-buckling design that is compression loaded like an arched bridge.

Regardless of the design, rupture disks cannot be made with an added “safety factor”, meaning that a rupture disk designated to burst at 100 psi must burst at 100 psi (within the agreed upon tolerance), and not at 1.5 or 2 times the burst pressure. Because of this exacting burst-pressure designation, a good understanding of the physical issues and the technology surrounding rupture disks is needed to prevent field failures. Variations in rupture-disk designs and holders can also contribute to improper installations that cause failures.

1. The rupture disk bursts when it shouldn’t

2. The rupture disk doesn’t burst when it should

Fortunately, most failure situations involve disks bursting or leaking when the user believes they shouldn’t, rather than not bursting when they should.

When analyzing a disk that has “failed” and troubleshooting the cause, engineers often think that the disk has burst below its rated burst pressure. More often, however, another root cause is discovered that contributed to the disk opening. Common causes for burst rupture disks are listed below. Here we look at a more-detailed understanding of the causes, based on troubleshooting experience. 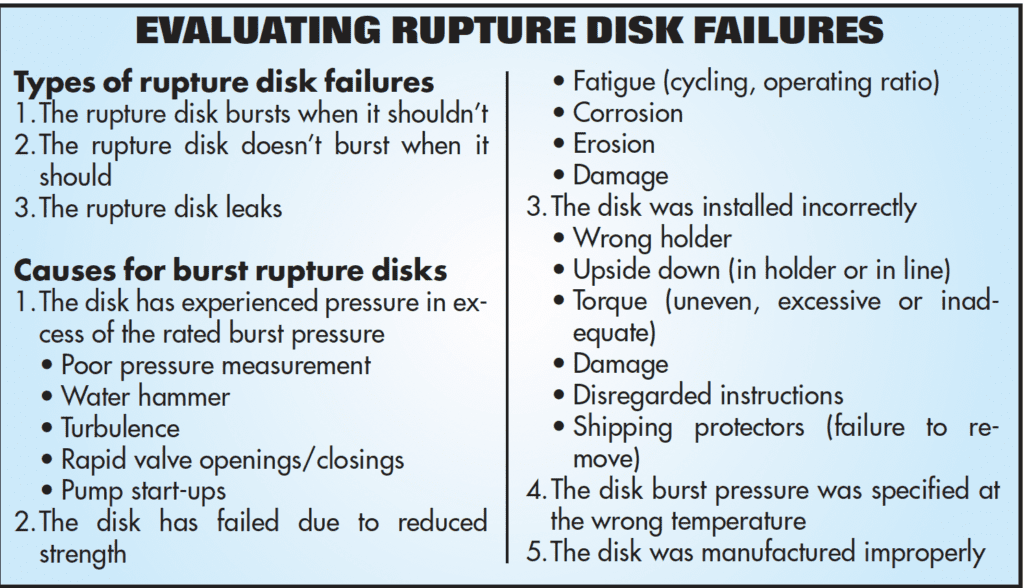 1. The disk has experienced pressure in excess of the rated burst pressure. The first question usually asked when a disk has failed early is, “Are you measuring the pressure near the rupture disk and at what sampling rate?” Most rupture disks react within milliseconds. If you are measuring the pressure far from the rupture disk, or sampling the pressure only at fifteen-minute intervals, there is a lot of missing information. Water hammer, turbulence, valve openings and pump startups are common causes of pressure spikes that happen so quickly that they are not caught by most process pressure-measuring equipment. Many rupture disk failures can be attributed to these difficult-to-detect pressure spikes.

Changes in the operating staff can sometimes expose a problematic situation, such as water hammer. As an example, a chemical company used a rupture disk on a filter housing at the end of a long liquid-service line, which was used to fill tank cars. Periodically, they experienced clusters of disk failures followed by months of trouble-free service. By keeping a record of the failures, it was discovered that during hunting season the man who regularly operated the valves went on vacation. His replacement closed the fill valve too quickly, causing a hammer effect in the long line leading to the valve and rupture disk. A change in operating procedures prevented future failures. Water-hammer issues can often be resolved by selecting slow-closing valves or adding air-filled dampers to the line.

2. The disk has failed due to reduced strength caused by fatigue, corrosion, erosion or other damage. In some cases, rupture disks are required to work at conditions that are up to 95% of their burst pressure. Rupture disks can have a thickness of less than 0.001 in. These two factors make changes in operating pressure or material thickness due to corrosion or erosion enough to reduce the burst pressure of a rupture disk.

Operating at close to a rupture disk’s designated burst pressure, or repeatedly cycling the pressure up and down can cause fatigue. Pressure cycles that occur once or twice a day rarely cause problems unless the operating ratio* is exceeded. It is usually impossible to diagnose fatigue through direct examination of the disk.

Disks that are located near positive-displacement pumps are especially at risk for fatigue failure, because it is often difficult to measure the true peak pressure of these pumps.

Corrosion rates that would be acceptable in a vessel or pipeline can significantly reduce the burst pressure of a thin rupture disk. Corrosion can be identified by the presence of pits or holes on the surface of the disk. Changes in the appearance of surface oxides are another indication of chemical attack. Figure 1 shows an example of the effects of corrosive materials on a disk. 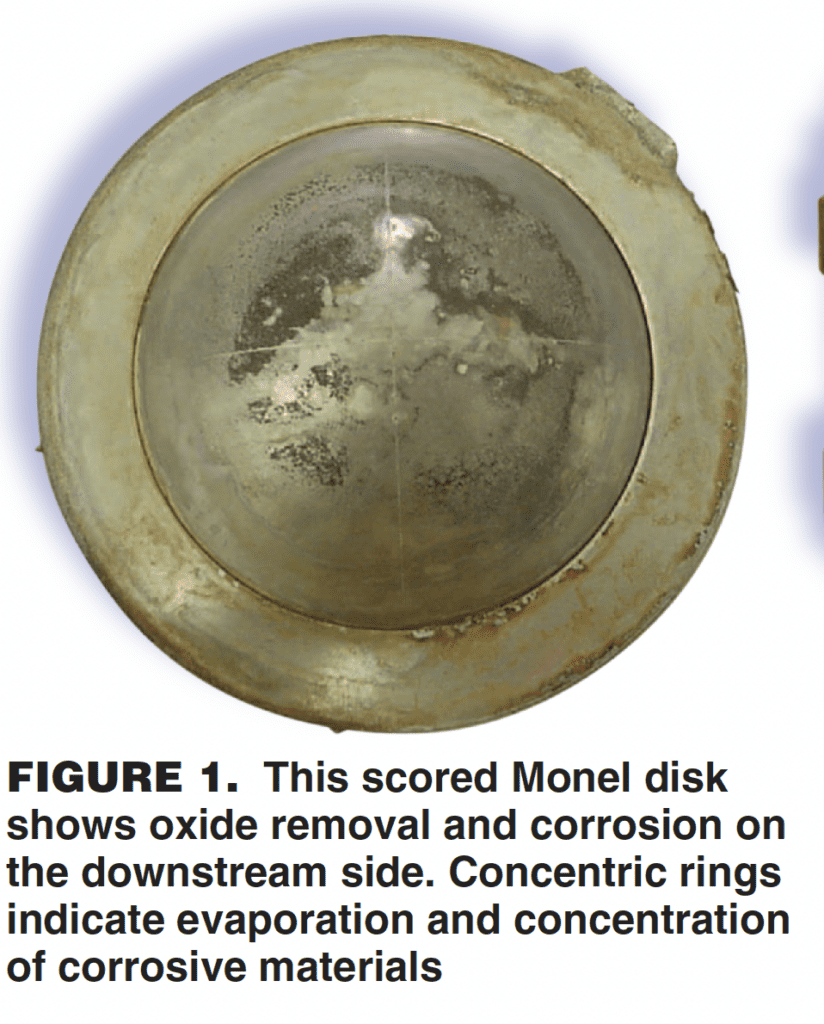 Occasionally, corrosion can come from unforeseen sources. Rupture disks mounted at the top of high-temperature vessels can collect wash water that evaporates, leaving high concentrations of corrosive elements, such as chlorides. Decomposing plastics can generate corrosives as well. Teflon seals, liners or coatings may be available to increase corrosion resistance.

It is important to select materials of construction with great care to avoid corrosion. Rupture disk manufacturers have standard materials that they work with, but most have special materials with excellent corrosion resistance, such as tantalum, that can be used in special situations. In extreme cases, the user may have to schedule more frequent replacement of rupture disks to prevent premature failures.

3. The disk was installed incorrectly. Rupture disks are precision devices. The materials, methods and expertise involved in making them allow manufacturers to keep burst tolerances very tight. All that expertise is wasted if the disk is installed in the wrong holder, installed upside down, torqued incorrectly or damaged.

The seating surfaces of rupture disks are critical to their performance. Damaged seating surfaces can cause the disk to leak, burst low or burst high, depending on the situation. Most rupture disks and holders have flow arrows to indicate their proper orientation. Many disks and holders have pins and holes to help prevent improper installation. Devices such as J-hooks, as shown in Figure 2, are available to prevent installation of the entire assembly upside down. 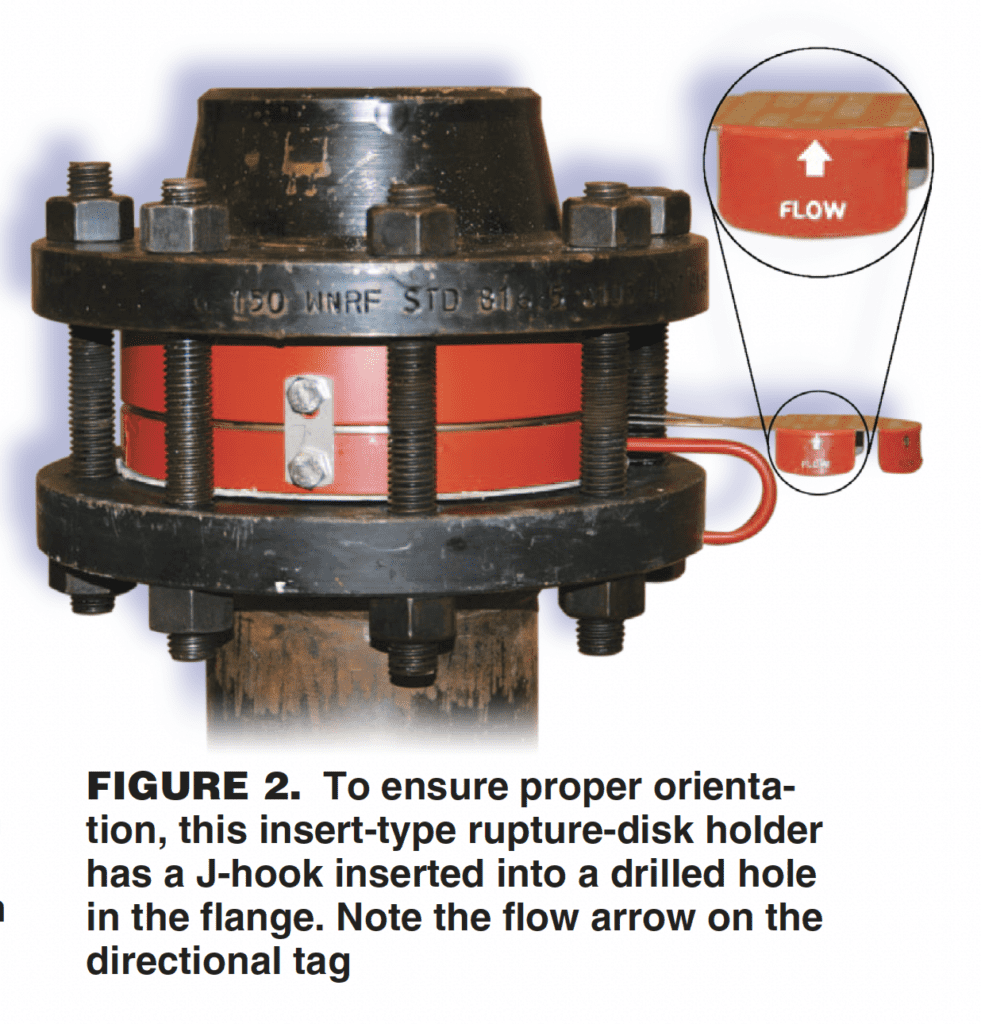 Installation guides with detailed instructions and illustrations are usually supplied in the box with rupture disks. These instructions include information about the proper holder, cleaning and inspection, and torque values when applicable.

Flat-seat rupture-disk holders commonly have a raised “bite” to create a leak-tight seal. This bite creates an indention in the seating area of the disk. Improper disk torque is often discovered by observing a light or irregular bite mark in the seating area. In severe cases, slippage can be seen in the seat area. These marks usually appear as very short scratches that radiate out from the center.

Many installation problems occur when someone is accustomed to one type of rupture disk and they install a different type in the same orientation without looking at the instructions. Observing the flow arrows on the disk tag and holder will prevent these mistakes. If you are ever unsure, contact the disk manufacturer.

If a disk is damaged before it is installed, do not install the disk. Take a good picture of the disk and seek advice from the manufacturer if a disk is in question. Most disks with visible damage will fail below the rated burst pressure. There is also a chance that the damage could cause the disk to burst above the rated burst pressure. The trouble and expense of replacing the damaged disk is usually less than the cost of a premature failure.

Many rupture disks come with metal or plastic shipping protectors, as shown in Figure 3. They should be marked to be removed before the disk is installed. Some disks, however, have fluoroplastic liners, as shown in Figure 4. These may look like they could be shipping protectors or wrapping, but they should not be removed. If you have any doubt, call your supplier. A disk designed to have a liner or seal will leak if that seal is removed. 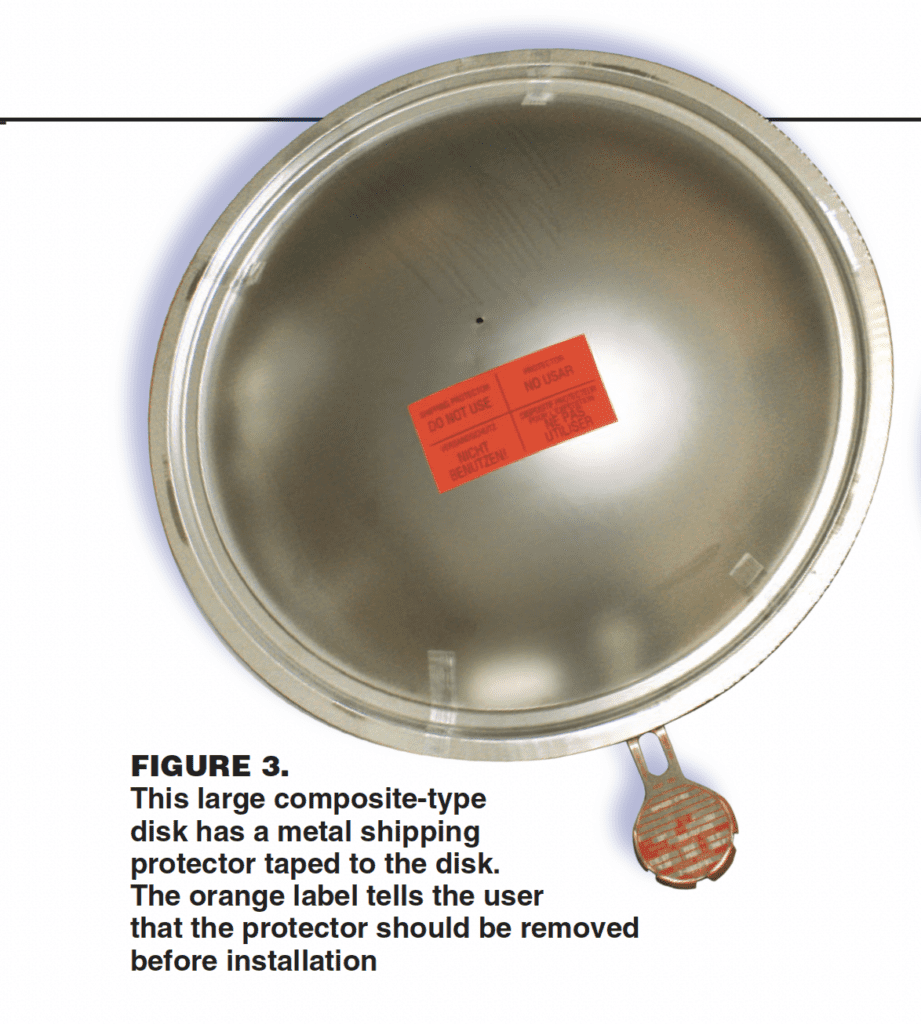 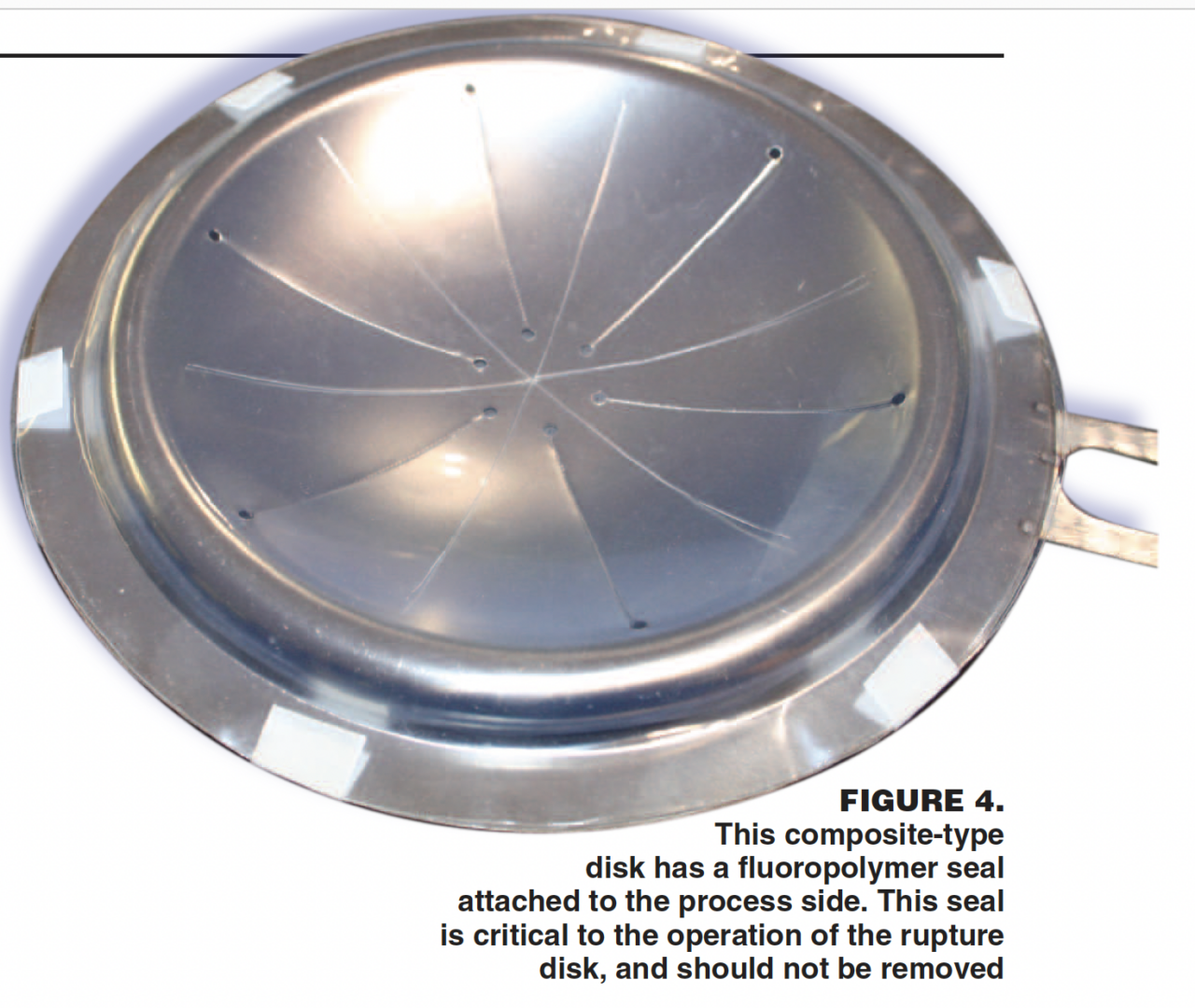 5. The disk was manufactured improperly. Mistakes do occasionally happen. The rupture disk industry, however, is regulated by multiple agencies and subjected to rigorous auditing that encourages meticulous recordkeeping and a high degree of attention to detail. In addition to outside enforcement, rupture-disk companies take pride in their role as suppliers of devices that make workplaces safer. Outright errors in burst pressure are very rare. Occasionally, a tooling failure or a material anomaly can cause a defective disk, but craftsmen and quality-control departments generally do a good job of catching those defects.

Rupture disk problems can often be solved by observing usage patterns for a particular application. Several burst disks in a short time period can indicate a bad lot of disks, but often they indicate a change in the system or in the installation methods. If your plant does not track rupture-disk usage, the company supplying the disk can often tell you how many disks were purchased for that application in a given year. This information can indicate if the pattern of ruptured disks is a new one or one that has existed in the past.

Rupture disk suppliers can be very helpful in troubleshooting disk failures and should be consulted when the cause for a disk rupture is unknown. The manufacturer may supply a returned-material authorization form and information sheet to learn as much as possible about the application. If a rupture disk is returned for analysis, it should, of course, be cleaned of any harmful chemicals. The disk should be packaged so that any scrapes, scratches, pits or dents and the general shape of the disk are preserved. Often, the analysis can be conducted with a good description of the system conditions and some good-quality digital photos. 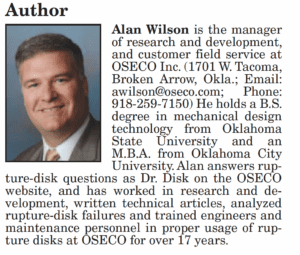 Focus on Valves
Rotary valve controls the flow of powders and granules The Coperion ZRD Heavy-Duty Premium rotary valve (photo) is designed for…
Reactive Chemistry in the CPI
Reactive chemicals and intermediates are used extensively in the chemical process industries (CPI). Hazardous chemical reactivity can be defined as…
Rupture discs now available in Iconel
This company has expanded its Atlas rupture-disc product line to include Inconel 625 material of construction. The material will now…
Install these rupture discs where atmospheric discharge occurs
The WMP (welded muffled plug) rupture-disc assembly is a single-use unit that is threaded into a pressure system. Designed to…
Runaway Reactions: Ignore the Chemistry at Your Peril
Click here for full pdf version of this article - includes all graphs, charts, tables, and author information