An electrochemical process for producing and recycling VRFB electrolytes

Industrially, all vanadium sulfates electrolyte solutions are prepared chemically by reacting high-purity vanadium pentoxide (V2O5) as starting material with high-purity sulfuric acid. However, the chemical process requires the use of a reducing agent that allows the reduction of the barely soluble peroxovanadium (VO2+) cation into highly soluble vanadyl (VO2+) cation and, to a lesser extent, V3+ cation to reach the targeted molarities. The proper reducing agent used is either an organic compound, such as oxalic acid, or an inorganic reagent, such as vanadium (III) oxide (V2O3), sulfur or gaseous SO2. During the chemical processes, the dissolution reaction kinetics are driven by temperature and the concentrations of both H2SO4 and the reducing agent. As a result, the production rate is not easily adjustable, Cardarelli says.

By contrast, the single-step electrochemical process is only driven by the amount of electricity supplied — no additional chemicals are required, because the reduction is only performed by the electrons provided at the cathode, explains Cardarelli. In Electrochem’s process (flowsheet), the suspension (slurry) made of solid V2O5 with H2SO4 is electrolyzed inside the cathode compartment of a divided electrolyzer with a plate-and-frame configuration and separated with an anion-exchange membrane (AEM). The electrolysis is conducted until the catholyte — made of equimolar acidic solution of vanadium (III) and vanadium (IV) sulfates — is finally produced. Meanwhile, in the anode compartment, the anolyte (dilute H2SO4) is concentrated until the maximum H2SO4 concentration is reached and it can be recycled with make-up H2SO4 for producing a new batch of catholyte. 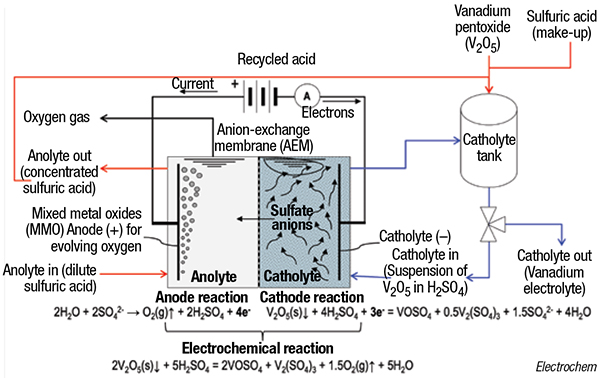 The process is also used to recycle end-of-life spent vanadium electrolytes, because the process removes deleterious impurities. The process is currently performed commercially at Electrochem’s facilities in Boucherville to produce tradenamed electrolyte formulations Vanalyte and SuperVanalyte, and to recycle used electrolytes. Ongoing discussions with users and constructors are underway to build skid-mounted or containerized modular units that can be deployed on-site, with nameplate capacities ranging from 5,000 to 25,000 L/d.