Wacker Chemie AG (Munich, Germany) is preparing to expand its production capacity for silicon metal at Holla, Norway. The Munich-based chemical company has already started a feasibility study to this effect. The construction of a new furnace is planned, which will increase capacity in Holla by around 50 percent of its current level. The feasibility study also examines how the infrastructure in Holla can be developed in order to accommodate any further expansion measures in the future. To this end, consultations are also being held with the local authorities on the adapted zoning plan and with energy suppliers. If these preparations are completed as planned and the expansion measures are approved by the authorities, the decision to build the new furnace could be taken toward the end of the year. It would then be scheduled for completion in 2025. 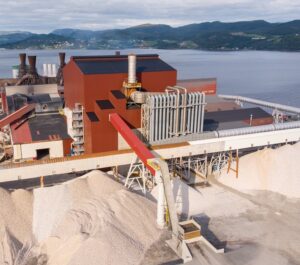 Silicon metal is one of WACKER’s most important raw materials, because it is needed for producing silicones and hyperpure polysilicon. Currently, the silicon metal produced in Holla covers around one-third of demand at WACKER’s sites in Germany.

“The planned expansion measures in Holla are an important prerequisite for accelerating our growth as planned,” says CEO Christian Hartel, explaining the strategic background of the investment measure. The Munich-based chemical group is aiming for sales of over €10 billion by 2030, with an EBITDA margin of over 20 percent.

“In order to meet the high customer demand for our silicone specialties and our high-quality polysilicon, we need to ensure that we have sufficient amounts of silicon metal available at all times. By expanding our captive production, we will become more independent of price fluctuations on rawmaterial markets and enhance our supply security, both during times of peak demand and if problems arise in relation to restrictions in global supply chains,” emphasized Hartel.

At the same time, capacity expansion and the enhancement and modernization of infrastructure are essential building blocks in WACKER’s plans to halve its greenhouse gas emissions by 2030. The Holla site will play a key role in achieving this target. “The production of silicon metal is very energy-intensive,” explains Robert Gnann, Head of WACKER SILICONES. “In order to significantly reduce greenhouse gas emissions in such production, the plants must be state-of-the-art. That is exactly what we are aiming for with the capacity expansion and planned infrastructure measures in Holla.”

At the same time, WACKER is working to replace the coal used as a reducing agent in the manufacture of silicon metal with renewable materials such as charcoal or pellets. The aim is to save up to 430,000 metric tons of CO2 per year in Holla.

In addition, the company is investigating ways of storing CO2 generated in production and thus removing it from the atmosphere or using it as a raw material for chemical products. At its Burghausen site, WACKER is planning a plant complex, called RHYME Bavaria, to produce renewable methanol from existing production processes using green hydrogen and CO2.