Combine three steps in one unit with this wastewater-treatment process

The first plant of this kind was completed in 1999 at Neubrandenburg, Germany, with a nominal capacity of 140,000 PE (population equivalent). Now, Te-Tech Process Solutions has developed a modular unit that has been specifically designed for small- to medium-sized treatment works, which offers the same benefits of the larger plants, but at a smaller scale and with a design for manufacture and assembly approach in mind. 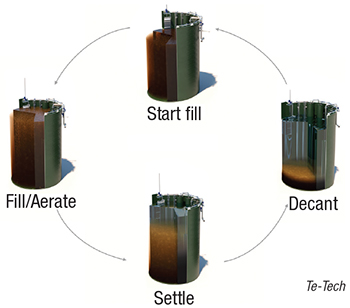 The te-cyc process is fundamentally based on a traditional sequencing batch reactor (SBR) whereby a sequence of tank filling, wastewater aeration, solids settlement and treated effluent decanting is repeated on a continuous cycle, explains Hazard. In the te-cyc process (diagram), there is typically 2 h of simultaneous filling and aerating, 1 h of settlement and 1 h of decanting. In the standard design, there will always be two or more tanks in parallel with their operating cycles out of phase with each other. This allows for a continuous inflow into the process as a whole, therefore eliminating the need for an upstream buffer tank, which would require energy-consuming mechanical mixing, says Hazard.

“Unique to the te-cyc process is the inclusion and design of an anaerobic selector zone, internal return activated sludge pump and bespoke mechanically driven decanter,” Hazard continues. The combination of the anaerobic selector zone and internal recycle suppresses the growth of poorly settling filamentous bacteria and promotes the growth of floc-forming bacteria that aggregate and form a large macrofloc. These macroflocs are larger than the typical flocs formed in conventional AS or SBR processes, and as such provide two key benefits: 1) the increased size leads to a quicker and more effective settlement of solids; and 2) the macroflocs are large enough to consist of an external aerobic zone and an internal anaerobic/anoxic zone, explains Hazard. “This means that nitrification and denitrification can occur simultaneously in the aeration phase of the te-cyc operation cycle,” he says.

Sequencing Batch Reactors for Water Treatment
Sequencing batch reactors (SBRs) are a variation on the activated sludge process in wastewater treatment. This article provides an overview…
An electrotrophic system that treats swine sewage in one step
Researchers from the Biological Systems Unit at the Okinawa Institute of Science and Technology Graduate University (OIST; Japan; www.oist.jp) have…
Bacteria for wastewater treatment
Researchers from the National University of Singapore (www.nus.edu.sg), led by associate professor He Jianzhong, have found a new strain of…
Designing an Integrated Wastewater-Treatment System
Meeting the wastewater-treatment demands of an integrated manufacturing complex demands a design that can address a diverse array of contaminants…
Facts at your Fingertips: Activated Sludge Process
The activated sludge process (ASP) is designed to speed up the rate of decomposition of waste material in water. First…