The weight of traditional batteries is an issue that impacts a broad range of industries and individuals, from soldiers in the field to aerospace and automotive manufacturers. Lithium-ion (Li-ion) batteries possess high power and energy density, which make them lighter than standard alkaline batteries. They also differ from primary lithium batteries in that they are rechargeable. These qualities make them ideal for use in military or space applications, among numerous others. But the weight is not the only issue with batteries — they also need to be safe.

Sony announced its development of the first commercially available Li-ion battery in 1991, as companies were looking for safe batteries to use in the emerging mobile phone market. The benefits of that Li-ion development went far beyond consumer electronics into many industrial applications. In those industries, the energy density the technology offers saves weight and enhances performance for key applications.

Lithium-ion batteries, which use as their electrolyte lithium salt in an organic liquid solution, are the familiar lightweight batteries in our mobile phones or electric vehicles (EVs). In Li-ion batteries, ions move from one electrode to another across the liquid electrolyte.

In addition to being lightweight, they are high-energy, long-lasting, have a long cycle life and they can perform in extreme temperatures.

Their superior cycle life explains why you can use your phone until the battery shows a zero percent charge, and the battery’s longterm life is hardly affected. The same cannot be said for the traditional vehicle battery.

Despite all of these benefits, there are some safety issues with Li-ion batteries associated with the conductivity of the liquid electrolyte. Therefore, designers must implement safety mechanisms in the battery system to ensure their safety and stability.  These safety systems can increase the weight and cost of the overall system.

This flammability of the liquid electrolyte makes Li-ion batteries imperfect solutions for automotive companies that must include these costly, weighty safety systems to use them in vehicles. Those heavy systems can limit next-generation capabilities.

Running a current through a more stable solid electrolyte would remove these obstacles and produce non-flammable batteries that would be even denser and lighter, have a longer life and cost less to manufacture. If the batteries could exhibit a high power-to-weight ratio, they might be ideal for use in electric vehicles. 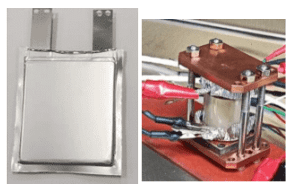 Experts in the battery industry are working to confront these questions head-on to provide higher energy, lower cost, safer batteries with a long lifecycle by developing a solid-state Li-ion battery.

Over the last decade, intensive research worldwide has led to the discovery of new families of solid electrolytes with very high ionic conductivity, similar to that of liquid electrolyte.

A solid-state electrolyte could cut a battery’s weight by 30 or 40% and would potentially be the most significant development in the field since Li-ion technology was invented more than 30 years ago. Some experts believe the solid-state battery vision could be realized within five years.

In addition to myriad applications in aerospace, mobility and defense, solid-state batteries could help improve the global energy grid as well. Because they can hold so much energy, double the voltage or more of other batteries, Li-ion batteries are used in energy storage systems (ESS), storing energy for wind and solar power. In remote areas of the world, mobile networks provide the chief communications infrastructure, but currently, they are powered by technology like diesel generators. Solid-state battery-powered ESS could operate these mobile networks with renewable energy. Solid-state batteries — with their high energy — would be an more sustainable solution for power in many applications.

In solid-state batteries, a solid compound replaces the liquid and allows lithium ions to migrate within it. The solid-state batteries show a marked improvement in safety at the cell and battery levels — inorganic solid electrolytes are non-flammable when heated, unlike their liquid counterparts.

Today’s Li-ion cells must be configured with the liquid electrolyte surrounding repeating units connected in parallel to avoid an ionic short. Conversely, a solid electrolyte allows repeating units to be connected in series, a so-called bipolar design, saving space and boosting voltage. This serial connection makes possible the stacking of many electric cells in a series in a single package, rather than multiple single-layered batteries. The technology makes possible a single battery with the same, or even more, power inside than a series of batteries.

Solid-state technology also allows the connection of two different powers of batteries — for example, an 8-V battery and a 12-V battery, eliminating the need to squeeze multiple large-capacity batteries into a small space. With this flexibility, solid-state batteries can provide exactly the voltage needed. 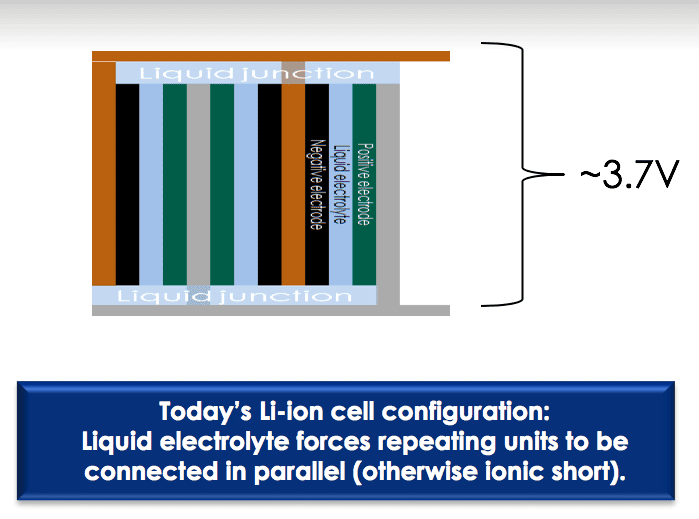 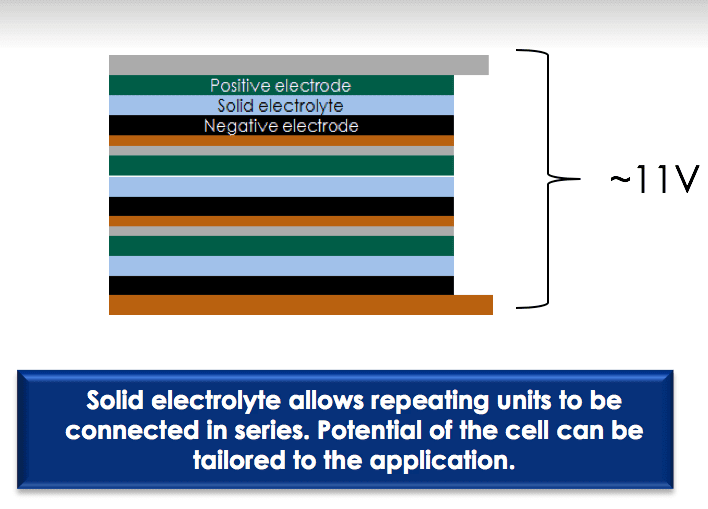 Solid-state batteries bring flexibility in installation, since they can be arranged in series and tailored for specific power demands

Solid-state Li-ion technology has its limitations, especially when coupled with lithium metal. A major challenge occurs on the anode, with the formation of dendrites. Dendrites are tiny, whisker-like structures that grow inside the batteries causing loss of power, short circuits, or worse, fires.

Dendrites form easily at the anode as the exceptionally high current — which allows the higher energy in these batteries — charges and discharges. They occur when the electrolyte’s ions combine with electrons and build up into lithium metal. These growths can proliferate throughout the battery, piercing its elements and causing problems.

Another challenge is the cycle life of the solid-state battery — that is, the number of full discharge and recharge cycles the battery can withstand. The solid-state lifecycle is limited, while a typical automotive battery life cycle is up to 15 years. If the battery were to die, replacing the entire battery system in an EV is an expensive and unwieldy proposition.

A big question in solid-state Li-ion batteries is exactly what solid material to use. This application requires the right material to address challenges like dendrite growth while preserving the high current and bipolar design, while also maintaining reasonable costs for users.

Experts are looking closely at these issues to evaluate the proper material at the right cost, which must also combine with a scalable manufacturing process to make this technology possible.

Scientists are considering several options for the solid electrolyte in these batteries. They fall into three categories: polymer; inorganic ceramic; or glass and hybrid, a combination of the two. Organic polymer options include polyethylene oxide (PEO) and solid polymer. Inorganic solid options include oxide, phosphate and inorganic sulfide. Each option has its strengths and drawbacks.

Sulfide-based materials have higher conductivity than polymers, and even higher than conventional liquid electrolytes. However, sulfides carry their own safety issues. They can react with moisture to create poisonous hydrogen sulfide gas. 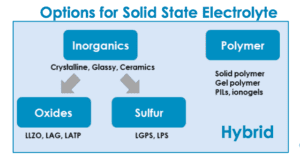 Polymer-based materials are safer because there is no risk of poisonous gas exposure. They also might be more scalable, as some companies’ current production equipment could be scaled up relatively easily to produce solid-state batteries with polymer technology.

For these reasons, much near-term solid-state battery development focuses on polymer electrolytes, and more fundamental materials and process development toward sulfide-based electrolytes.

A major European alliance is launching an ambitious program of research, development and industrialization for new generations of batteries focusing on advanced high-density Li-ion and solid-state technologies. The program addresses all market segments, such as electro-mobility (EVs, e-buses, railways, marine, aviation), energy storage (ESS) and specialty industries. Member companies are working together over the next seven years to meet their common goals in this technology. Throughout the different phases of the project, the core group of the Alliance will partner with European academia, research centers, subject-matter experts, end-users and other entities to leverage the wealth of expertise already accumulated throughout Europe. 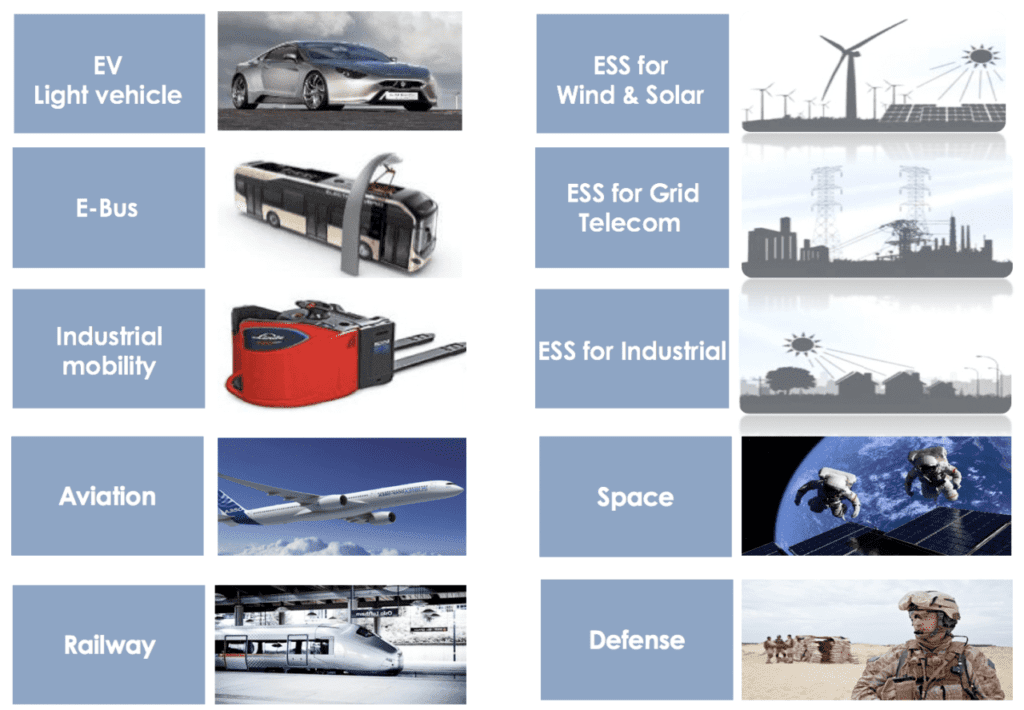 Widespread industrial focus on invention is critical in this area because it is possible that an entirely new material will be necessary to move forward this technology. Academia is the source of many important innovations, and there is much potential there. Technology startups are working on new materials, and significant companies are involved in developing new sulfides. It might take a novel invention to push the industry into the solid-state Li-ion future.

Cost will always be a factor. Experts do not yet know which material will make the most successful solid-state Li-Ion battery, so predicting the cost of material and manufacturing is difficult, at this point. Timing also is difficult to estimate. R&D projects by their very nature contain an element of uncertainty, making it hard to predict timing. But the rapid progress of research combined with the eagerness of end-users to adopt the technology will surely make solid-state batteries a crucial technology in the coming years. ♦

Thomas Greszler manages the Li-Ion development team for Saft in Cockeysville, MD, focusing on industrialization/scale-up of advanced battery concepts along with R&D on battery materials. He joined Saft in 2013. Previously, from 2005 until 2013, he worked for General Motors initially developing fuel cell catalysts and electrodes with reduced cost and improved durability before, in 2010, taking on leadership of the GM Electrochemical Cell Design group which provides fuel cell and battery cell modeling to support system design, cost trade-offs, fundamental understanding and improved performance/durability. He has written six technical papers, one book chapter, has more than ten patents pending/issued, and has presented results at many technical conferences.  Education includes a B.S. in 2003 and M.S. in 2005 both in chemical engineering from Case Western Reserve University and an M.B.A. from the University of Rochester in 2012.

Joong Sun Park is a Solid State Technical Manager at Saft America. He manages the SAFT Solid State Battery Program (advanced high-density lithium-ion and solid-state new generations of batteries) activities in the U.S. His areas of expertise include research in design and synthesis of novel cathode materials, as well as high-power, high-energy anode materials for next-generation lithium-ion batteries. Prior to joining Saft, he worked at Argonne National Laboratory and Lawrence Berkeley National Laboratory, where he was a member of various DOE funded programs. He completed his Ph.D. at Stanford University in 2012.