Temperature control under a pressure blanket
This company has expanded its product range for demanding temperature-control…
Highlights Recently Published Books for the CPI: May 2021Facts At Your Fingertips: Evaporator Equipment TypesFocus on Maintenance ToolsImmersive technologies advanceAdvanced Analytics for Process Safety 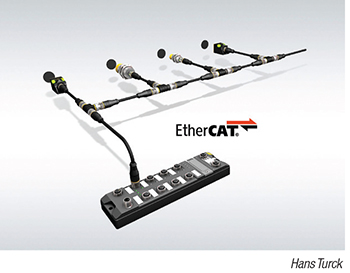 The TBEC series has been added to this company’s range of RFID solutions for fast interfaces to EtherCAT networks. The TBEC module (photo) in fully potted plastic housing comes with protection according to IP67/IP69K standards and can be used in an extended temperature range from –40 to 70°C. The EtherCAT RFID module enables HF and UHF read-write heads to run at the same time, thus simplifying applications with different bandwidths and reducing the range of inventory needed. The TBEC also supports the HF continuous bus mode by which up to 32 bus-capable HF read-write heads can be connected to each of the four RFID channels. Sensors, lights or other actuators can be connected to the eight universal DXP I/Os. All terminals are implemented as five-pin M12 male connectors, and the power supply (L-coded) is implemented with the future-proof M12 power technology. — Hans Turck GmbH & Co. KG, Mülheim an der Ruhr, Germany