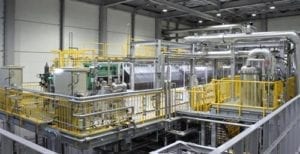 Asahi Kasei Engineering received the order for the alkaline-water electrolysis system from Toshiba Energy Systems & Solutions Corp. in 2017. The system was installed at the Fukushima Hydrogen Energy Research Field (FH2R), which opened on March 7, 2020, as a technological development project of NEDO (Japan’s New Energy and Industrial Technology Development Organization). Able to produce hydrogen at the rate of 1,200 Nm3 per hour (rated power operation), it is the world’s largest-scale system comprising a single stack. After its installation in November 2019, several trial operations of the system were performed to confirm that the product hydrogen met the required quality standards, with hydrogen supply operation beginning in March. While hydrogen supply operation continues, the system’s performance in response to fluctuating power input will be evaluated, and its full-fledged operation at the core of FH2R is scheduled to begin this summer.

Through practical application of its Aqualyzer alkaline-water electrolysis system based on original technology, Asahi Kasei will provide solutions to society for clean environmental energy.

Sasol and Sonatrach announce project to produce hydrogen and low-carbon syngas in Italy
Sasol Italy and Sonatrach Raffineria Italiana have announced the "Hybla Project," which is an ambitious initiative that aims to build…
Tata Chemicals Europe signs low-carbon hydrogen offtake agreement
Tata Chemicals Europe (TCE) and Vertex Hydrogen have signed a ‘Heads of Terms’ offtake agreement for over 200 megawatts of…
Cepsa, partners to develop 200-MW electrolysis plant at Andalusian Green Hydrogen Valley
Cepsa  (Madrid, Spain), Enagás Renovable, one of the largest European developers of renewable gas projects, and Alter Enersun, a company…
BP evaluating the establishment of a hydrogen hub in Germany
Bp plc (London) will evaluate the feasibility of building a new hydrogen hub in Germany. The project, which would be…
John Cockerill enters agreement to build electrolyzer factory in Morocco
John Cockerill (Seraing, Belgium), a specialist in alkaline electrolyzers, and a leading Moroccan energy company have reached an agreement to…