Sustainability Snapshot: Making Practical Progress
In their own words, sustainability leaders from the chemical process…
IN THE NEWSNEWSFRONTS

Determining Overall Pump Lifecycle Costs
Beyond the purchase price, there are other optimizable costs that…
FACTS AT YOUR FINGERTIPS

Facts at your Fingertips: Distillation Trays and Packing
Industrial distillation columns use either trays or packing to promote…
TECHNOLOGY PROFILE

Interpret clamp load within bolts, and monitor remotely
Knowing the tension of critical joints is essential to safety,…

A technology that removes oil from the surface of water without pumps or chemicals has been developed by German researchers at the Universities of Bonn (www.uni-bonn.de) and Aachen (www.uni-aachen.de) and textile-manufacturer Heimbach GmbH (Düren, Germany; www.heimbach.com). Textiles with special surface properties passively skim off the oil and move it into a floating container. The study has now been published in the journal Philosophical Transactions A.

The textile surfaces are modeled after the floating fern Salvinia: its leaves are superhydrophobic, so when submerged they wrap themselves in an air jacket and remain completely dry. At the same time, the Salvinia surface is superoleophilic. “This allows the leaves to transport an oil film on their surface [photos],” explains Wilhelm Barthlott, professor emeritus of the University of Bonn and former director of its botanic gardens. “And we have also been able to transfer this property to technically producible surfaces, such as textiles.” 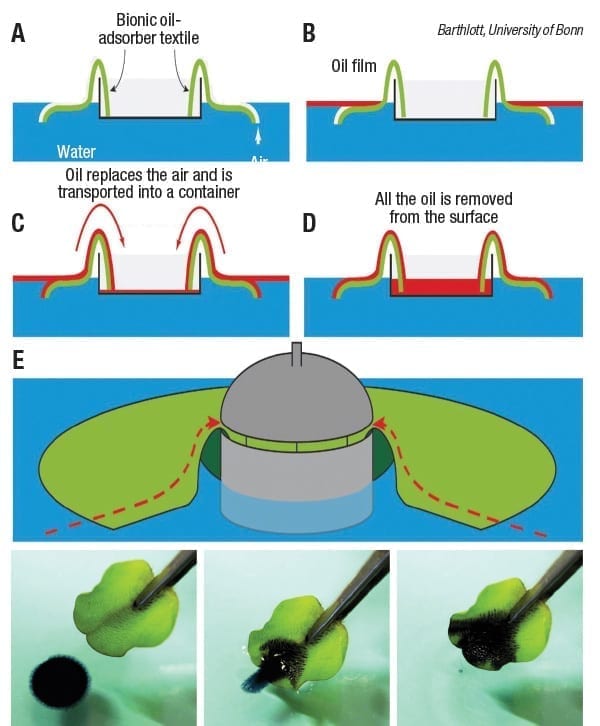 Unlike other materials that have been used for soaking up oil spills, these “bionic oil adsorbers” (BOAs) do not absorb the oil. “Instead, it travels along the surface of the fabric, moved forward solely by its adhesive forces,” explains Barthlott.

The BOA device consists of a buoyant container with the oil-adsorbing textile attached at the edge (diagram). The submerged portion initially holds an air film. The air becomes displaced by the oil as it is adsorbed and is transported to the storage container. This transport only stops when the oil level inside the container has the same height as the water surface/oil film level outside of the container (or when all the oil is adsorbed).

The procedure is not intended for large-scale oil disasters, such as those that occur after a tanker accident. But particularly small contaminations, such as engine oil from cars or ships, heating oil or leaks, are a pressing problem. “Even minor quantities become a danger to the ecosystem, especially in stagnant or slow-flowing waters,” emphasizes Barthlott. This is where he sees the major application potential of the new method, for which a patent has been filed by the University of Bonn.