Satelytics collects high resolution spectral imagery from the planet’s surface using satellites, drones and planes. Its technology combines these images with proprietary algorithms to create unique electromagnetic signatures that can be used to detect environmental changes, including releases or leaks. Its software visualizes these datasets on interactive displays that give end-users a clear and actionable picture of operations, and alert them to facility risks, like methane leaks. 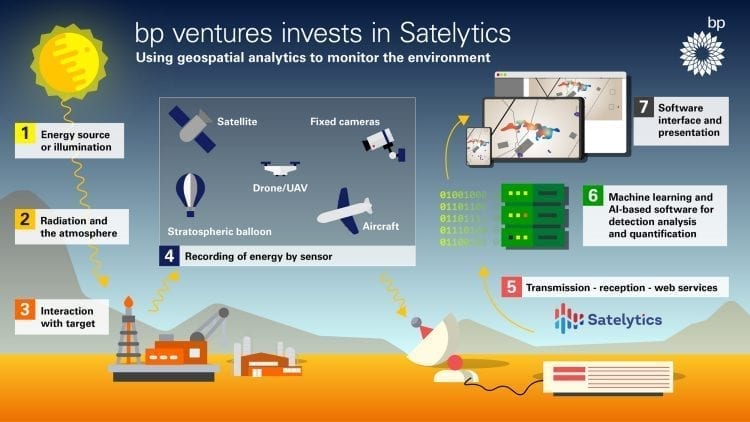 bp’s $5 million investment will enable Satelytics to develop its technology further and scale its applications throughout the oil and gas sector. Use of the technology has the potential to be part of bp’s aim to install methane measurement at all major oil and gas processing sites by 2023, publish the data and then drive a 50% reduction in methane intensity of its operations.

Morag Watson, bp senior vice president of digital science and engineering, said: “Satelytics is modernising the energy sector by making data about physical assets more accessible and digestible, leading to better decision making. We are excited to work closely alongside their unique team of scientists and technologists to help them evolve their technology and to continue to move the needle on industry digitalisation.”

Sean Donegan, chief executive of Satelytics, said: “bp’s early use of our detection and quantification software has inspired us to expand our capabilities. bp’s investment marks an inflexion point for Satelytics, which will assist us in expanding our technological capabilities and fuel future innovation.”

David Hayes, bp ventures managing director for the Americas and chief operating officer, said: “Earlier this year we announced our ambition to become a net zero company by 2050 or sooner, and to help the world get to net zero. As part of our ambition, one of our 10 aims relates to methane measurement at all of our major oil and gas processing sites by 2023 and reducing methane intensity of our operations by 50%. Advanced technologies such as Satelytics, integrating multiple approaches to efficiently detect emissions, have the potential to be a valuable tool that can support this work.”

Earlier this year, ExxonMobil announced that it was field-testing several advanced methane-detection technologies as a part of its proposed methane-emissions mitigation framework.