"As long as fossil fuels and carbon-intensive industries play dominant roles in our economies, carbon capture and storage (CCS) will remain a critical greenhouse gas reduction solution. With coal and other fossil fuels remaining dominant in the fuel mix, there is no climate friendly scenario in the long run without CCS." So begins the 2013 edition of the Technology Roadmap — Carbon Capture and Storage, published last year by the International Energy Agency (IEA; Paris, France; www.iea.org). This decade is critical for moving deployment of CCS beyond the demonstration phase in accordance with the 2DS,* says the report.

Although some might argue that CCS deployment is moving too slowly, progress is being made. As of February 2014, there are 12 large-scale projects in operation globally, 9 under construction and another 39 in various stages of development planning, according to the Global CCS Institute (GCCSI; Melbourne, Australia; www.globalccsinstitute.com), which published The Global Status of CCS: February 2014 on the 18th of February. The 21 projects in operation or under construction represent a 50% increase since 2011 — a sign of growing confidence in the application of CCS technology at large scale, says the report. Since 2011, China has doubled its number of projects, with 12 large-scale CCS projects.

An integrated CCS project (Figure 1) involves capturing CO2 from a large stationary source, transporting the captured CO2 and injecting it under pressure deep into the earth to a geological formation where it will, hopefully, be stored or sequestered indefinitely instead of entering the atmosphere. Such geological formations include depleted oil-and-gas wells and saline aquifers. In fact, the idea is not new — CO2 injection has been used for many years for enhanced oil recovery (EOR), in which case, the goal has been to get more oil per well rather than for environmental concerns.

GCCSI maintains a comprehensive database of all large-scale CCS projects around the world — currently a total of 60 projects. Of those 60 projects, 10 involve post-combustion capture technology, all of which involve power plants (Table 1). Other methods used for capturing the CO2 are pre-combustion from natural gas (13 projects) or gasification (22 projects); oxy-fuel combustion (4 projects); separation from industrial processes (9 projects), such as ammonia production; or not yet determined (2 projects).

Capturing carbon dioxide from gas streams has been used for over 70 years, such as for “sweetening” natural gas, to purify synthesis gas or hydrogen from gasifiers and reformers. As such, CO2 capture can be considered a mature technology. However, when one considers the major sources of anthropogenic CO2 entering the atmosphere — namely combustion processes in power plants, cement kilns or steel mills — the conditions are such that the process is very expensive. Unlike natural gas sweetening, in which gas streams are typically under high pressure and contain little or no oxygen, fluegas from a combustion plant is closer to ambient pressure, so the operating conditions for the CO2 scrubber are very different. And the presence of O2 leads to degradation of traditional CO2 absorbers, such as monoethylamine (MEA), as well as to corrosion problems. As a result, the application of post-combustion CO2 capture from huge stationary sources has — for the most part** — eluded commercial status, while considerable R&D has been, and continues to be aimed at developing new absorbents and other means to reduce the costs for capturing CO2 from fluegas.

Shell Cansolv (Montreal, Canada; www.shell.com/shellcansolv) has developed a process to treat post-combustion (fluegas) streams, which are at atmospheric pressure and contain high levels of O2, and where the CO2 is quite dilute. The presence of O2 introduces potential corrosion and solvent degradation concerns to manage, and the lower pressure means that equipment sizes are much larger, says the company.

The Cansolv process (Figure 2) uses a regenerable solvent — a proprietary amine technology — to capture the CO2 from the fluegas and release it as a pure stream, which can be sold for enhanced oil recovery (EOR), as a commodity chemical or for eventual sequestration.

SaskPower (the first entry in Table 1) will be Cansolvs first (and the world’s first) commercial application of post-combustion CO2 capture at a power station. Provincial regulations limiting the emissions of CO2 from power stations to 420 kg/MWh forced SaskPower (crown-owned power provider in Saskatchewan) to evaluate the economics of replacing an aging 150-MW turbine (Boundary Dam unit 3) with an equivalent combined-cycle gas turbine (CCGT), or to retrofit the station by equipping it with CCS. After a thorough evaluation, Saskpower came to the conclusion that post-combustion CO2 capture using the Cansolv process with CO2 sold into nearby EOR operations was the better net present value (NPV) solution. The construction of the plant was completed in 2013.

A significant advantage of Shell Cansolvs technology is cost and minimal environmental impact. The technology uses regenerable amines to capture both SO2 and CO2, which means that no direct waste byproducts are generated. In addition, 1 million metric tons (m.t.) per year of CO2 will be captured from the coal-fired unit. This will be compressed, transported through pipelines and used for EOR in nearby oilfields. This project is a milestone for the fossil-fuel power industry worldwide, as it proves the viability of large-scale CO2 capture and demonstrates that carbon capture can be brought to commercial scale, says the company.

Cansolv has applied its patented SO2-capture systems at coal-fired power plants in China that are currently in operation. The technology employed there is essentially identical, using a different amine that targets SO2 instead of CO2.

Last September, Shell Cansolv and Technip (Paris, France; www.technip.com) signed an agreement to leverage their respective expertise in marketing an end-to-end solution for CCS projects. Last month, Technip was awarded a contract to provide front-end engineering design (FEED) for the onshore elements of the Peterhead Gas CCS demonstration in Aberdeenshire, Scotland — a project to capture, compress and transport by pipeline 1 million m.t./yr of CO2 to an offshore gas reservoir for longterm storage beneath the North Sea. The design will utilize Shell Cansolvs CO2 capture technology.

The demonstration test got underway in June 2011. After verifying the technology for recovering CO2 from the coal-fired plant fluegas, as well as recovery performance, integrated capture and sequestration demonstration testing began in August 2012. High-performance continuous and stable operation of the large-scale CO2 recovery plant was confirmed.

The CO2-capture demonstration plant that supplied the CO2 under this project was built jointly by MHI and SCS, and is currently the worlds largest in scale (operating), handling some 500 m.t./d. It has capacity to recover 150,000 m.t./yr of CO2 with recovery efficiency above 90%. For CO2 recovery, the facility adopts the KM CDR Process, which uses a proprietary KS-1 high-performance solvent for CO2 absorption and desorption that was jointly developed by MHI and the Kansai Electric Power Co., Inc. (Chem. Eng. January 2008, p. 12). 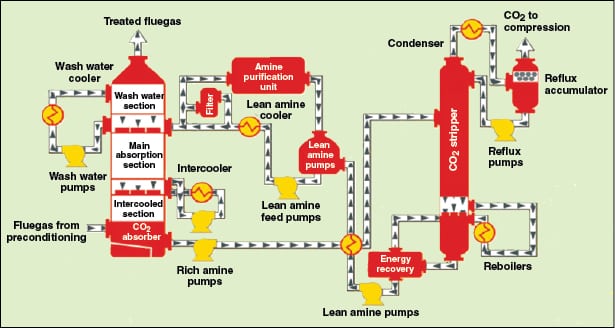 Figure 2. The Cansolv COï»¿2ï»¿-capture system uses an advanced amine solution to absorb COï»¿2ï»¿ from fluegas. The captured COï»¿2ï»¿ is then stripped from the amine, and the recovered COï»¿2ï»¿ can be compressed for injection into a geological formation
Shell Cansolv

Progress on the amine front

Last August, BASF SE (Ludwigshafen, Germany; www.basf.com) granted a license to JGC Corp. (Yokohama, Japan; www.jgc.co.jp) for a gas-treatment technology, called OASE, that JGC will use in the plant for Japans first large-scale CCS demonstration project in Tomakomai, Hokkaido, Japan. Performance testing of the plant is scheduled for completion by the beginning of 2016.

With technology from BASF, CO2 will be removed from a gas stream from a petroleum refinery close to the location. The unit is designed to capture about 200,000 ton/yr of CO2, preventing it from being released into the atmosphere.

Since 2009, BASF and Linde AG (Munich, Germany; www.linde.com) have been developing and testing new technology for capturing CO2 from fluegas in a 7.2-ton/d pilot plant at RWEs Niederaussem power plant near Cologne, Germany. New aqueous-amine-based solvents developed by BASF can reduce energy input by about 20%, says the company. The partners intend to operate the pilot plant until the end of 2016.

Since 2010, BASF has also been working with RTI International (Research Triangle Park, N.C.; www.rti.org) to further develop cost-effective technology to capture CO2 from coal-fired power plants. The collaboration is investigating non-aqueous solvent systems that can be recycled. The capture process could use 40% less energy than conventional amine-based processes, says BASF.

Meanwhile, last June, the Energy Sector of Siemens AG (Erlangen, Germany; www.siemens.com) completed a concept study and successful testing of its PostCap process using fluegas from a natural-gas-fired combustion process, achieving 3,000 hours of operation. Prior to this, the PostCap pilot facility operated for more than 6,000 h on fluegas from E.ONs coal-fired Staudinger Power station near Frankfurt am Main, Germany. Drawing on experience gained from pilot operations, the company offers PostCap technology for large-scale projects, says Siemens.

In the PostCap process, an amino acid salt is used as an absorbent instead of conventional amine. Because amino acid salts do not evaporate, no additional washing unit and related equipment on top of the absorber is required. Furthermore, the solvent is said to be robust against O2 degradation. Through improved process configuration, the thermal energy demand for stripping CO2 from the solvent is lower than that required by conventional MEA, which leads to a reduction by about 20% with PostCap, says the company.

*IEAs 2°C senario (2DS) describes how technologies across all energy sectors may be transformed by 2050 for an 80% chance of limiting average global temperature increase to 2°C.

** Since 1976, Searles Valley Minerals captures around 270,000 m.t./yr of CO2 (from a coal-fired power plant) at its soda ash plant in Trona, Calif. The CO2 is captured using an amine solution, and used for the carbonation of brine in the production of soda ash.

SAF Production Expands for a Low-Carbon Future
To lower their climate impact, petroleum refiners are increasingly assessing greenhouse-gas-emission intensities as they consider processing lower-carbon feedstocks. One area…
U.S. Refining Industry Reckons with Uncertain Energy Future
Many indicators point to current success and prosperity for U.S. petroleum refineries, but simultaneously, the industry is facing a future…
Building on the Paris Agreement
December 2015 marked a landmark international agreement to lower greenhouse gas (GHG) emissions in order to limit the rise in…
Considering Fugitive Emissions During the Conceptual Design Stage
The ability to reduce fugitive emissions through the use of strategic design modifications not only protects workers and the environment,…
Air-Pollution Control: Assessing the Options
Compliance with air-pollution regulations requires ongoing effort. Follow these recommendations to assess competing options and optimize system design while minimizing…