Covestro AG (Leverkusen, Germany) is expanding its production capacities for thermoplastic polyurethane (TPU) Films in the Platilon range, as well as the associated infrastructure and logistics. To this end, the company is investing a low double-digit million euro amount in its German center of excellence for the aforementioned films in Bomlitz, Lower Saxony. This site of Epurex Films, a wholly owned subsidiary of Covestro, houses application development and production for the semi-finished products, among other things. 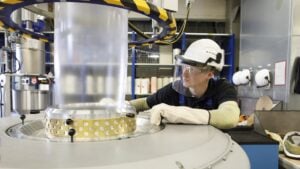 A film-blowing line at the Bomlitz site in Germany. (Source: Covestro)

The new capacity is intended to meet the growing global demand for multilayer TPU Films. They are used in automotive interiors and construction, among other applications. Breathable, water-impermeable specialty films have also proven their worth in wound care and outdoor clothing. The new facilities are scheduled for completion as early as the end of 2023.

“With this capacity expansion, we are strengthening our Bomlitz site and our position as a leading supplier of technical specialty films,” said Dr. Klaus Schäfer, Chief Technology Officer of Covestro, at the groundbreaking ceremony. “At the same time, we are investing in promising technologies and applications and creating new jobs.”

For Aleta Richards, global head of the Specialty Films segment, the expansion offers opportunities to respond even better to individual customer needs and offer more sustainable products. “For some time now, we have also been developing customer-specific solutions with films made from alternative raw materials, as we are also seeing increasing demand in this area. The development and production of partially bio-based products is therefore to become a new focus at the Bomlitz site.”

Covestro is fully geared toward the circular economy and aims to become climate-neutral by 2035. To this end, the Bomlitz site plans to switch its energy supply completely to green electricity starting this year.

Epurex Films is one of three Covestro competence centers for specialty films in Germany. The other two centers in Leverkusen and Dormagen are focused on research, production and application of polycarbonate films.