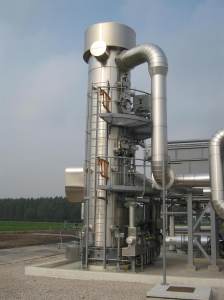 At the initial design stage of pressure vessels with nozzles that are provided with standard flanges according to ASME B16.5 or ASME B16.47 Series A, the layout (routing) of piping connecting to the nozzles is still unknown or not completed. As a result, the loads (piping reactions) exerted by the connecting pipework are also unknown. The nozzle loads are essential in completing the pressure vessel design. In order to achieve a prudent and reliable finalization of the pressure vessel design, a conservative estimate of the magnitude of such nozzle loads should be made. It has been found in practice that the flanged joints between pressure vessel nozzles and connected pipework can be considered as the weakest link in the system.

This new insight has been obtained from numerous practical situations that occur in the temperature domain between –30 and 250°C. Therefore, it has been chosen to primarily base the nozzle loads on the permissible flange load. In order to serve engineers in their design effort, an approximate method is designed to err on the safe side. The procedure for determining the individual permissible flange loads is described below. These loads, together with internal pressure, should be considered for evaluation of the local stresses as per applicable design code. If local stresses are within acceptable limits, then the design of the pressure vessel can be considered as being completed.

For the flanged connection, the condition of Equation (1) must be met:

Kf = the Koves factor, which is in fact a moment correction factor that smooths the effect of  bending moments

Note that the greater the torsional resistance (relative to the bending resistance), the less the induced circumferential bending stress and corresponding flange rotation as a result of the external moment.

The Koves factor can be expressed as:

The polar moment of inertia, J, is a quantity used to predict an object’s ability to resist torsion, in objects (or segments of objects) with an invariant circular cross section and no significant warping or out-of-plane deformation.

In the field of structural engineering, the second moment of area of the cross-section of a beam is an important property used in the calculation of the beam’s deflection and the calculation of stress caused by a moment applied to the beam.

The expression for Kf, Equation (2), can be written as:

Equations (4) and (5) give the piping reactions assumed to be induced from external pipework, which shall be taken into account in the mechanical design of mechanical static equipment in addition to internal pressure.

The local loads F (N) and M (N.mm) are the local loads to be introduced with directions according to Figure 1. After determination of the reference loads F and M, the following load cases, as indicated in Table 1, should be considered in the stress analysis of the relevant nozzles.

Figure 1. These figure show the local loads, F and M, and their directions

Table 1. Load cases to be considered for stress analysis

Note that shear stresses caused by transverse force and the torsional moment may be left out of consideration at the nozzle-shell intersection, since their contribution will not amount to more than 0.15 times the allowable stress.

In almost all internationally recognized design codes or standards, rules have been laid down for the assessment of nozzle loads. In most cases, reference is also made to sources from the literature on this topic.

Finally, if the final piping design is completed and the piping reactions are known, the following inequality, or load fraction rule, should be satisfied:

If the sum of the load fractions exceeds 1.0, the piping reactions may cause excessive stresses in the nozzle-shell junction. This calls for either a more rigorous analysis or a redesign of the nozzle or piping.

If the load fraction rule is met, then it might be considered that the nozzle load-induced shell stresses are within acceptable limits. Thus, it has been proven that the concerned flanged nozzle has adequate load capacity to withstand the internal pressure plus piping reactions without overloading the flange joint and to overstress of the nozzle-shell junction.

For those who are interested in the background of the introduced Koves factor, please see Ref. 1.

A pressure vessel is equipped with flanged nozzles placed on both the cylindrical shell and on the curved part of the torispherical head. The DN 300 (NPS 12 in.) type welding neck flanges class 300 are compliant with ASME B16.5 and are made of ASTM A105 material. The gaskets used are of the spiral-wound type according to ASME B16.20. The nozzle neck has a nominal thickness of 9.53 mm (STD).

Table 2 summarizes the specific data needed for the calculation.

From Equation (3), we find a value for the Koves factor, Kf:

Permissible individual flange loads are found from Equations (4) and (5):

In this example, the stress analysis of the nozzles for the various load cases plus application of the so-called load fraction rule have been left out of consideration.♦

Walther Stikvoort (Address: Wagnerlaan 37, 9402 SH Assen, the Netherlands; Email: stikvoort@ziggo.nl) is a renowned principal mechanical & structural integrity consultant, who has spent about 50 years in the design and design verification of pressure vessels and piping to recognized key design codes and also has significant experience in fitness-for-service engineering critical assessment (ECA) according to common FFS procedures. He has demonstrated his expertise in several key roles, such as expertise holder static equipment engineering (Authority Level TA-1) at NAM (a joint venture of Shell and ExxonMobil) (18 years) and as manager mechanical engineering at Kellogg Continental (15 years). Moreover he worked for NRG as a senior consultant asset integrity (7 years) and for GLT PLUS (Jacobs) as a principal consultant mechanical integrity (6 years). He developed numerous engineering standards and practices focused on improving asset integrity and involved in the development and lecturing of training courses and seminars for the pressure equipment community. As author and co-author various papers and articles have been published in recognized international journals, engineering textbooks and technical magazines. Stikvoort graduated from the Higher Institute of Technology (the Hague), where he studied mechanical engineering.

Critical Flanges: Advanced Washers Eliminate Galling and Hot Work
During vessel breakout activities, plants should pay close attention to the design of the washers used on bolted flanges. A…
Interpret clamp load within bolts, and monitor remotely
Knowing the tension of critical joints is essential to safety, performance and maximizing uptime. SPC4 load-indicating technology (photo) makes it…
Standard ASME B16.5 Flanges: Bolt Tightening and Target Loads
Using the approach outlined here, piping engineers can select the most appropriate bolt-tightening technique based on pressure class and flange…
Vacuum pump product line for hygienic housekeeping
This company offers a new Wash Down range of suction cups and vacuum pumps (photo) that can be exposed to…
Rotary jet heads drastically slash cleaning times and costs
This company has added three rotary jet heads — GJ A2, GJ A6 and GJ PF FT (photo) — to…