The technologies associated with the Industrial Internet of Things, and the benefits that can be attained from them, are topics that are frequently described in the pages of Chemical Engineering. Finding and implementing the best new technologies for an application takes focus, insight and often the willingness to take a chance on a new approach. Last month, at the Connected Plant Conference (www.connectedplantconference.com), 11 individuals and teams were recognized for their roles in moving the dial toward digitalization in the chemical process and energy industries. The “Game Changers,” listed below include innovators, problem solvers and fast risers or champions in digitalization.

Jonathan Alexander, Albemarle Corporation — Alexander initiated and managed the transformation of two specialty chemical plants within Albemarle by successfully implementing realtime analytics. He involved operators and supervisors in selecting which process variables to analyze and how to respond to analytics-based signals.

Amber Hayton, Royal Dutch Shell — Hayton has been leading development activities for digitalization of Shell’s learning portfolio. Expert knowledge is being captured and digitalized via a virtual-reality learning platform, which is being built for both local and cloud use to make it globally applicable.

Nexceris Sensors Group— This group’s innovative sensor monitors emissions from lithium-ion batteries that indicate when the battery is faulty. It can cut the current to the battery before it starts a fire, making it a very useful safety tool for energy storage — an ever-growing application.

Robinson Castillo, Florida Power & Light Co. — Castillo was a pioneer in spearheading the use of wireless technology in the power industry at a time when it was new and met with much skepticism. 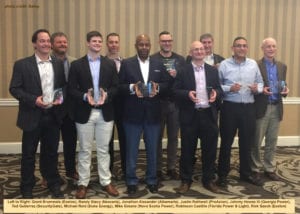 Joan Knight and Grant Brummels, Exelon — Knight and Brummels led the implementation of GE Predix, as well as other digital initiatives in Exelon’s nuclear and fossil generation businesses.

Ted Gutierrez, SecurityGate — This company has developed a software platform that simplifies cyber risk assessments so that users can focus on mitigating cyber risks rather than finding them.

Johnny Howze III, Georgia Power Co. — Howze has been pioneering turning Plant Scherer, the largest coal-fired plant in the U.S., into the connected plant of the future. His vision is based on two principles: the need to prepare the workforce of tomorrow; and the need for a digitized plant and processes.

Asset Management Office, Nova Scotia Power — Through their efforts in digitalization, this office has been able to provide its fleet of power-generation plants with insight about potential problems and to help with capital planning and investment decisions.

ProAxion, Inc. — This innovative startup developed a system that simplifies the process of measuring, transmitting and analyzing vibration and temperature data for remote monitoring of rotating machines.

Michael Reid, Duke Energy — Reid oversees technical programs for Duke Energy where data analytics are being used for everything from routine to predictive maintenance.

Related Content
Looking ahead
This has certainly been a year to remember, and as 2020 comes to an end this month, I expect we…
Software Powers the CPI
IIoT technologies have enabled software platforms that are more powerful than ever, but fundamental engineering principles are still at the…
New academia-industry partnership focused on AI-driven materials discovery
A new partnership focused on using artificial intelligence for materials discovery has been launched. The Alliance for AI-Accelerated Materials Discovery…
Heide Refinery accelerates its digital journey with Aspen Technology software
Aspen Technology, Inc. (Bedford, Mass.) announced that Heide Refinery, one of the most complex refineries in Europe, has licensed Aspen…
Predictive Maintenance: Taking Operations to the Next Level
Chemical companies can drive peak performance and extend the lifecycle of their assets by making the step-change from time-based to…