A closed-loop, long-duration energy-storage system (diagram) developed by Malta, Inc. (Cambridge, Mass.; www.maltainc.com) could provide a carbon-neutral path to industrial heating. “One of the exciting facets of this technology is that it generates a lot of discharge heat. When we charge our system with renewable energy, the heat we’re discharging is, in effect, decarbonized, usable heat,” says Ty Jagerson, vice president of commercialization at Malta. Take, for example, Malta’s 100-MW M100 system, which is designed for 10 h of charging and discharging per day. “During the discharge cycle, the system is generating 100 MW of electricity, while also generating 70 MW of 100°C heat — over 10 h, that’s 700 MWh of usable industrial heat,” notes Jagerson. Industrial drying applications — for instance, drying biosolids in wastewater-treatment applications or residues from agricultural or pulp-and-paper processing — are particularly well-suited to efficiently utilize the generated heat. “In that 100°C range, there’s a massive amount of heat demand that we could take care of basically by using leftover wind and solar power,” he adds. 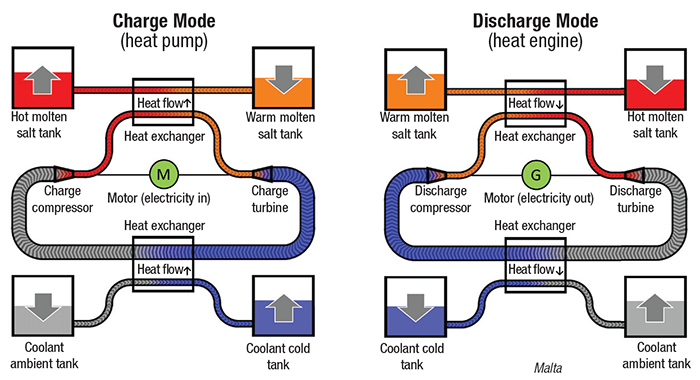 Malta’s thermal storage system incorporates a novel heat-exchanger design co-developed by Alfa Laval AB (Lund, Sweden), one of Malta’s major investors. In charging (heat pump) operation, renewable energy runs a charging turbine, which sends hot air through a compressor into a heat exchanger, transferring the air’s thermal energy to molten salt, which is subsequently stored in a hot tank, while the cooled media flows between a pair of coolant tanks. When the energy stored in the molten salt needs to be discharged, the temperature difference between the system’s tanks is converted to thermal energy, and hot air runs through a second turbine, sending electricity back to the grid. “The system is based on a closed-loop Brayton cycle. When we’re charging the system, the air flows in one direction, and then we change the direction of airflow when we are discharging,” explains Jagerson. Current designs are focused on 10–12 h of storage, but Malta is seeing increased interest in storage durations as high as 5–7 days.