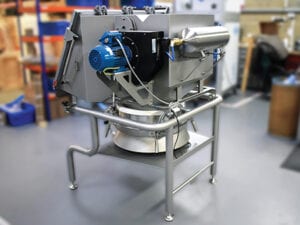 Farleygreene’s Sievmaster Easilift sack-tip station, which is distributed in the U.K. and Ireland by this company, is a sack-tip station that is used widely throughout the processing industries. Now, with the launch of its Localized Dust Extraction System (LDEE, photo) Farleygreene has further improved the system. The LDEE system consists of an ATEX 22 rated electric fan that is coupled to a large, horizontal HEPA (high-efficiency particulate-air) filter, which is built into the back of the sack-tip hood. Dust is sucked away from the operator and into the filter while a removable baffle plate directs the flow of dust up into the filter. The fan and filter operation point has been finely tuned to balance both energy efficiency and extraction rates. The system has been shown to trap 99.9902% of dust down to a particle size of 0.2µm. — Genesis Process Solutions Ltd., Sandbach, U.K.