Ørsted Group A/S (Fredericia, Denmark) announced that the partners of the Westküste 100 project received funding confirmation from the German Federal Ministry of Economic Affairs and Energy as the first large-scale hydrogen project in Germany within the Reallabor (real-world laboratory) framework.

The project has a total budget of EUR 89 million. The approved funding for the project, starting on 1 August 2020, amounts to EUR 30 million. A total of ten partners have joined forces to form the consortium: EDF Germany, Holcim Germany, OGE, Ørsted, Raffinerie Heide, Stadtwerke Heide, Thüga and thyssenkrupp Industrial Solutions, together with the Region Heide Development Agency and the Fachhochschule Westküste (West Coast University of Applied Sciences). 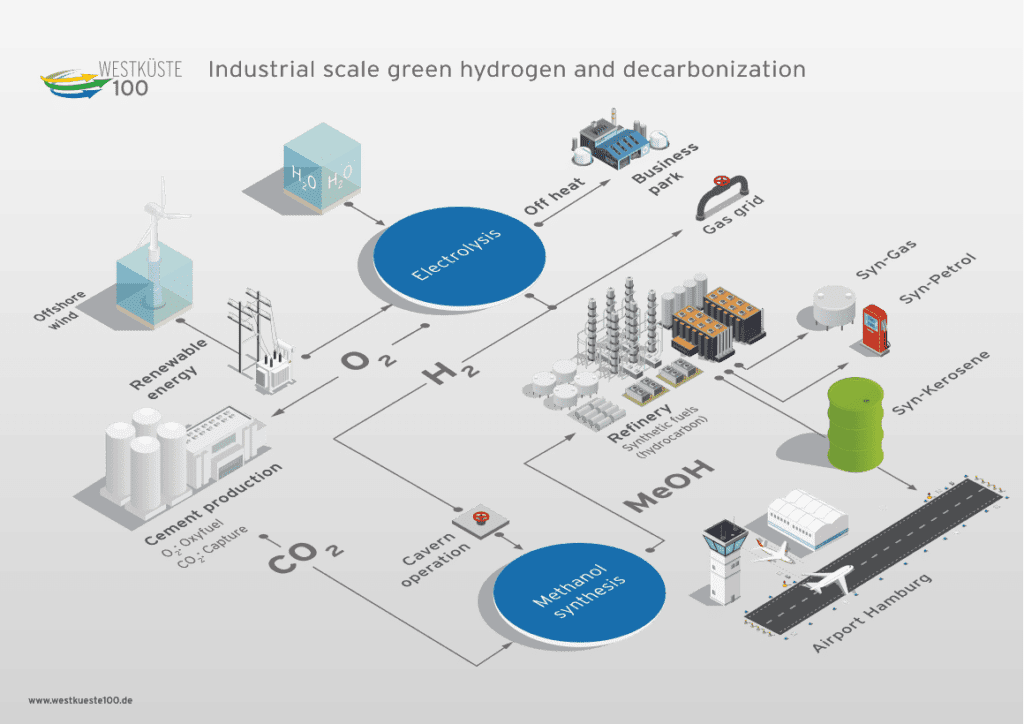 Martin Neubert, Executive Vice President and CEO, Ørsted Offshore: “The funding from the German Federal Ministry for Economíc Affairs and Energy to the Westküste 100 project is a significant step forward for our hydrogen business. Westküste 100 is our third hydrogen project – and the first one in Germany – found eligible for public funding, and we’re very excited about the prospects of supporting heavy industries and heavy transport with clean alternatives based on renewable hydrogen.”

Producing hydrogen has traditionally been associated with high carbon emissions, but by using renewable electricity, e.g. from an offshore wind farm, the process of producing hydrogen from water (electrolysis) can be completely decarbonized. Energy-intensive industries and the transportation sector will have the opportunity to reduce their carbon intensity by using renewable hydrogen.

The purpose of the Westküste 100 project is to make industrial processes, aviation, construction and heating more sustainable in the future. The Westküste 100 project models a regional hydrogen economy on an industrial scale. The conditions on Northern Germany’s west coast are ideal for this: A strong wind energy region meets innovative companies that want to contribute to reaching the crucial climate targets.

Volker Malmen, Managing Director, Ørsted in Germany: “We are very pleased with this positive decision. This project is unique because it uses offshore wind power for large-scale hydrogen production. Only offshore wind can provide such a reliable renewable source of green power for the electrolysis. This requires that the expansion of renewables and offshore wind power is balanced with the increased demand for hydrogen production. We believe that renewable hydrogen is key to decarbonize industrial sectors. The Westküste 100 project is a cornerstone in our efforts to lead the way in renewable hydrogen as we are doing in offshore wind, to create a world that runs entirely on green energy.”

With the grant approval from the German Federal Ministry of Economic Affairs and Energy, the Westküste 100 project can now enter its first phase. This first phase includes a number of elements. A newly founded joint venture, “H2 Westküste GmbH”, consisting of EDF Germany, Ørsted and the Heide refinery, intends to build a 30 megawatt electrolyzer, which can produce green hydrogen from offshore wind energy and provide information on the operation, maintenance, control and grid services of the plant. Furthermore, pipeline transportation of hydrogen and the use of hydrogen in existing and new infrastructure around Heide will be tested. The consortium will also initiate the work to develop the vision of a large-scale sector coupling including a 700MW electrolyzer system into a concrete project. This will require a significant R&D and engineering effort.