Hydrogen power is gaining ground quickly in many applications, and recent breakthroughs have proven its efficacy in datacenter use. Power Innovations (American Fork, Utah) and Microsoft recently announced  a breakthrough in renewable energy: hydrogen fuel cells were successfully used to power a row of datacenter servers for 48 consecutive hours. A specialist in green hydrogen, Power Innovations has also launched a project focused on generation of hydrogen using waste gases from petroleum drilling sites.

A full datacenter server load –200kW of hyperscale computers and computer simulators– was run on hydrogen-powered fuel cells for 48 continuous hours, longer than ever before.  In September of 2019, the same test was performed for 24 continuous hours, which at that time was a first in the industry. 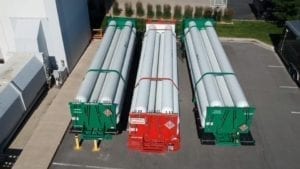 During this test, 10,560 kWh of electricity was produced; 51 kg of hydrogen was consumed; and over 7,000 +  L of pure water was produced, says Power Innovations.

According to Mark Monroe, a principle infrastructure engineer on Microsoft’s team for datacenter advanced development, an Azure datacenter outfitted with fuel cells, a hydrogen storage tank and an electrolyzer that converts water molecules into hydrogen and oxygen could be integrated with the electric power grid to provide load balancing services. 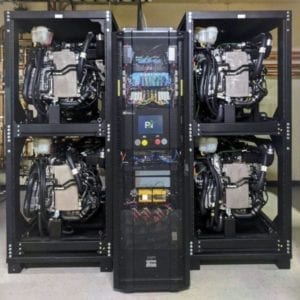 For example, the electrolyzer could be turned on during periods of excess wind or solar energy production to store the renewable energy as hydrogen. Then, during periods of high demand, Microsoft could start up the hydrogen fuel cells to generate electricity for the grid.

“All of that infrastructure represents an opportunity for Microsoft to play a role in what will surely be a more dynamic kind of overall energy optimization framework that the world will be deploying over the coming years,” said Lucas Joppa, Microsoft’s chief environmental officer.

To further explore how Microsoft can leverage its investment in hydrogen fuel cells and related infrastructure, the company today named Joppa as its representative on the Hydrogen Council, a global initiative of leading energy, transport and industry companies to spur the hydrogen economy.

Scientists have already proved that hydrogen fuel cells can be used to generate greenhouse gas-free energy from the most abundant element in the universe, Joppa noted.