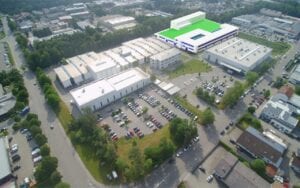 The Netzsch facilities in Waldkraiburg on Geretsrieder Straße with the new building (Source: Netzsch Pumpen & Systeme)

On 27 November 2020, the shareholders’ meeting of the Netzsch Group (Waldkraiburg, Germany) approved the centralization of the facilities in Waldkraiburg. With an investment of €50 million, a new production unit will be built on Geretsrieder Straße, integrating the assembly hall and offices from the current plant on Liebigstraße (photo).

This is a clear commitment of the Netzsch shareholders to the location Waldkraiburg. It is to be seen in connection with the implementation of the Global Operations Strategy, with which the Pumps & Systems Business Unit will bring its production and assembly operations even closer to its customers around the world and exploit cross-location advantages and synergies. Netzsch will invest approximately €50 million in Waldkraiburg over the next three years, including normal investments. These will go into the plant and machinery as well as into a new office landscape which will be set up on top of the halls. Thus, for the first time, all Netzsch employees in Waldkraiburg will be working in just one plant, even though the opportunity to integrate the findings of the last few months regarding mobile working, into the office concept will not be missed.

This is the additional investment plan within the framework of the Netzsch Pumps Global Operations Strategy. For this purpose, a further approximately €50 million will be invested worldwide over the next few years, that is, a total of €100 million. These funds will be used for factory expansions in the U.S., Brazil, China and India. In addition to the assembly center already operating successfully in Anting near Shanghai, further assembly centers will be added in South Africa, Australia, Thailand, Russia, Mexico and Indonesia. All locations will work together in a digitally supported network. The aim is to achieve even greater customer proximity. In this way, and with other accompanying measures such as e-learning, Proven Excellence, MyNetzsch and other future oriented projects, Netzsch intends to further expand the global market leadership for its pumps.

Based on the full construction approval, the first orders for the construction trades and warehouse automation will soon be initiated. Depending on weather conditions, the ground-breaking ceremony will take place in the first quarter of 2021.

Related Content
A new frame design extends the life of this pump
The new GD 2500Q Heavy Duty Frame (HDF) quintuplex pump (photo) is designed to extend pump service life through an…
A new turbopump for ion-implantation applications
HiPace 2800 IT (photo) is a turbomolecular pump especially dedicated for ion-implantation applications. The rotor design of the turbopump results…
Focus on Pumps
New sizes available for progressive-cavity pumps NEMO progressive-cavity pumps with the FSIP design (photo) are capable of pumping and precisely…
New mill-discharge pumps for efficient slurry handling
This company’s mill-discharge (MD) pumps (photo) are robust and have been designed to operate reliably in highly abrasive environments, providing…
Grinder product range extended to handle higher flowrates
The N.Mac twin-shaft grinder is now available in expanded sizes (photo) for flowrates up to 400 m³/h. The N.Mac is…