Several methods and calculations are available for determining particle size and particle-size distribution. This article provides and overview on how to use them

The behavior of particulate material is greatly dependent on its geometric properties, including particle size, shape and particle-size distribution (PSD). In industrial processes, these parameters affect phenomena such as sedimentation, flow through porous media, fluidization, gas-solid separation by cyclone, size enlargement (agglomeration) and powder mixing. Specific examples of particle-size effects include the following:

Similarly, particle size affects the end-use properties of many particulate products, such as the reactivity of catalysts, bioactivity and dissolution of drugs, setting time of cement, hiding power of cement, flowability of powder, and packing density of advanced materials. Particle properties also play a central role in the handling of solids-containing fluids.

Unfortunately, particle size characterization is among the most neglected areas in the field of chemical engineering, despite its importance in the vast majority of unit operations involving particulate matter and bulk solids handling. Since particle size measurement is routinely employed in many industries, appropriate techniques for particle measurement, and data presentation and interpretation, are of utmost importance to understand solids behavior, handling and final product qualities.

Representing the size of a particle by its diameter is common, because the use of a single linear dimension to represent particle size is desirable for simplicity. Spherical particles can be conveniently defined by a single dimension (diameter). However, major issues arise for irregularly shaped particles, which is the case for most real-world applications.

There are several measures available to represent particle size, categorized into three areas (Figure 1, Table 1 and Ref. 1), as shown here: 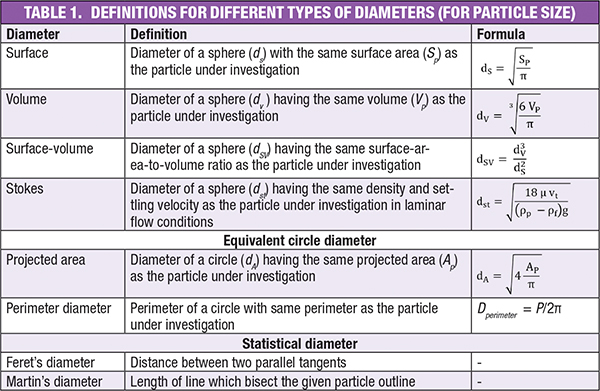 Hence, volume-equivalent sphere diameter is given by Equation (2).

Several commonly used equivalent-sphere diameters are shown in Table 1 and Figure 1. More definitions can be found from Allen [ 2]. Microscopy is widely used to measure the particle size based on length. 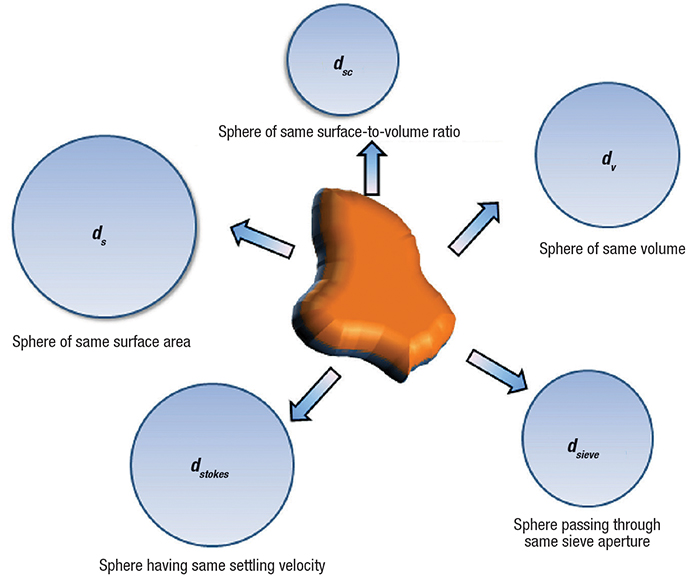 Figure 1. Equivalent spherical diameters based on different controlling characteristics can result in different particle size values for the same particle

Equivalent circle diameters, such as the projected area diameter (area of circle with the same area as the projected area of the particle under investigation), can also be used as shown in Figure 2A. These measures are outdated due to their statistical nature and poor reproducibility because there are many possibilities to estimate distance between tangents and bisector.

Size of an assembly of particles 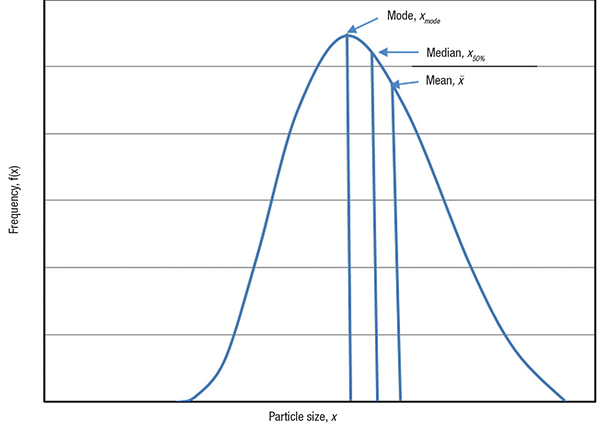 Figure 3. The graph shows representations of mean, median and mode of the particle size distribution

The mean size for the particle population under consideration can be specified in different ways. The common way of defining the mean size is arithmetic mean (Equation 3).

Mathematically, it is represented as D[1,0], since the power of the diameter term in the numerator is 1 and that in the denominator is 0 ( xi0 = 1). It is generally advisable to use some kind of weighted mean size to evaluate the effects of particle size on the product quality or performance. For example, weighting of size by surface area is more meaningful for particles where surface area plays significant role (as in the case of catalysts). Equation (4) shows the arithmetic mean weighted by number of particles.

It is also possible to calculate mean based on the surface area and volume (Equation (5)): 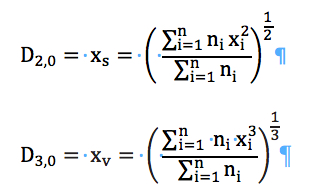 This can be changed in terms of mass fraction using Equation (6) and Equation (9), as shown in Equation (10):

The volume moment mean size in Equation (11) is also widely used in chemical engineering. This is also known as DeBroucker’s mean size.

In the general method of data representation for PSD, a fraction of the quantity of particles in each size interval is identified. This quantity can be number, length, surface area, volume or mass.

Different size-analysis instruments employ different principles and report different particle characteristics. These characteristics could be number, length, surface area, volume or mass, which depend upon the principles of measurement of the particle size. This gives rise to PSD values that are based on different quantities, including PSD by number, by length, by surface area, and by volume or mass. The PSD by mass and volume are expected to be same if the particle density is independent of size. The integral relation is given in Equation (12):

Where the subscript r indicates the type of quantity being measured, q represents fractional density and Q represents cumulative density, as per the International Organization for Standardization (ISO) standard 9276 (Representation of Results of Particle Size Analysis). Thus, the following notations are used to indicate different types of PSDs (Table 2).

The values of constants kL, kS and, kM contain information about shape factors, which must be known to make accurate conversions. These factors may vary with particle size and can make it difficult to make accurate conversions. However, the information about the shape factor can be obtained easily, if it is independent of particle size, from the following condition:

The method to determine surface distribution from mass or volume distribution is described below, as in Svarovsky [1] and Rhodes [6].

and integrating from 0 to x,

Where AT is the area under the curve of 1/ x versus QM). Thus, dividing each value of QM by AT should yield the corresponding values of QS. Similarly, the method to determine mass distribution (QM(x)) from number distribution (QN(x)) is accomplished by multiplying different values of qn, that correspond to different sizes of x, by x3. The resulting curve of x3 qN (x), is then simply scaled down by a following factor to give qM (x) [1].

The example problem in this section is solved to illustrate the procedure of converting between different representations of PSD. The PSD data used in the problem are obtained from a sieve analysis.

Example Part A. To convert mass distribution into surface-area distribution, tabulate the values of size interval and mass retained in each interval in columns 1 and 2, respectively in Table 3. Determine the average size, as per equation [( x1 + x2) / 2], as shown in column 3.

The mass fraction is calculated by dividing the mass in each interval by the total mass (57.3 g) and tabulate the result in column 4, using the following equation: mi /(∑ mi).

Then find the cumulative mass fraction by adding values cumulatively and tabulate them in column 5. Find out (1/ x) as in column 6. As explained here, by using Equation (19), we can find the surface distribution:

The integral in the right hand side of the equation represents the area under curve area (AT) of 1/x versus QM, which must be calculated. Here, using the trapezoidal rule, we can find out the required value of the integral in Equation (19).

The trapezoidal rule to evaluate the integral is shown below. In our case, we must find out the integral value for each of the size intervals, as well as the total (AT), as shown below. The calculated values have been tabulated in column 7 of Table 4.

For example, the first and second entries in column 7 are

Next, calculate the cumulative area under the curve, as shown in Column 8 of Table 4.

Finally, multiply each entry in column 8 by (kS /kM) to yield the surface distribution, as per Equation (19).

This will result in a cumulative surface distribution, as shown in Column 9.

Example Part B. To convert mass distribution into number distribution, a similar procedure is employed, as the two are related by the following relationship, qM (x) = kM x3 qN (x).

Integrating from 0 to x,

In this way, we can find the number distribution from the mass distribution. The integral can be estimated using the trapezoidal rule, as follows. The remaining steps are similar as illustrated in the case of the solution for Part A. The calculated values can be found in Table 5.

Example Part C. This example illustrates how to calculate different types of mean sizes. Calculation of mean sizes, such as D[1,0], D[2,0], D[3,0] and D[3,2], are shown for the same dataset. Use columns 3 and 4 of Table 4 for xi and mi, respectively, for the calculations. 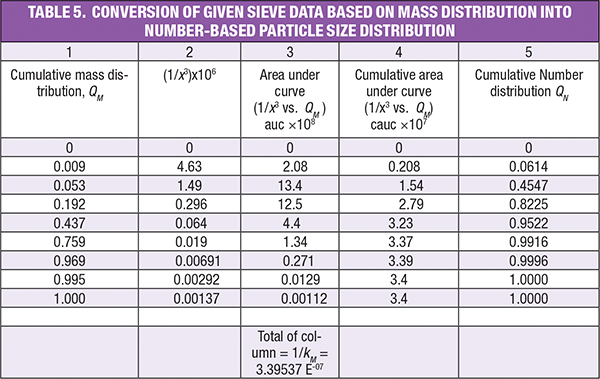 Finally, the Sauter mean can also be calculated from Equation (10).

Thus, the same population of particles yield different results depending upon the type of mean required. The plot of the cumulative undersize distribution based on the mass, surface area and number on the same plot is shown in Figure 4. Care must be taken to account for the errors inherent in this type of conversion in the final estimation [5]. 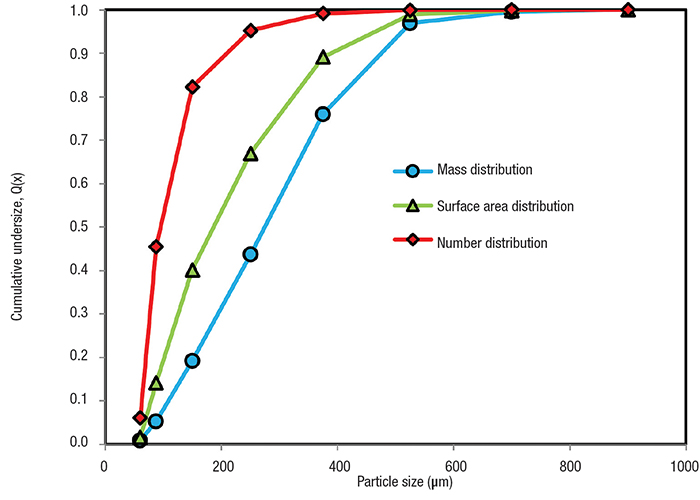 In most applications in solid-fluid separation, the PSD by mass is of most value, since we are mostly interested in gravimetric efficiencies and mass balances. The PSD by surface or by number may be more relevant in some cases of liquid clarification, where turbidity is an important parameter [1].

6. Describing the size of the population of particles, Accessed at: http://www.ide.iitkgp.ernet.in/Pedagogy_view/example.jsp?USER_ID=82

Chetan M. Patel is an assistant professor in the Chemical Engineering Department of S.V. National Institute of Technology (SVNIT; Surat, Gujarat, India; Email: cmp@ched.svnit.ac.in). He obtained a bachelor’s degree in engineering from R.E.C., Surat, a master’s degree from IIT Delhi and a Ph.D. from SVNIT Surat. His research interests include production of nanomaterials by stirred media milling, nanomaterials preparation for drugs, lithium-ion batteries, supercapacitors, powder characterization and handling, discrete element method (DEM) simulations of bulk solids, and molecular simulation of nanocomposites. Patel has 15 years of teaching experience. He developed a pedagogy course on mechanical operations under the National Mission Project and designed many experiments for particulate materials. He delivered many experts talks and has many research papers to his credit in science citation index (SCI/SCIE) journals.