Saving energy and costs. The use of solar collectors reduces the consumption of fossil fuels. Depending on the application and location, an attractive financial return can be achieved by reducing direct fuel costs. In addition, a company using solar thermal energy becomes less affected by rising energy prices.

Potential not yet realized

The potential for using solar-thermal energy in the chemical process industries (CPI) is there. The technology is proven and there are professional companies providing technically advanced solutions across a wide range of required temperatures. Attractive financial returns can be achieved.

Nevertheless and until now, strong market penetration has not been achieved. Of the 245.1 GWth solar thermal collectors installed worldwide [ 1], less than 1% is integrated into industrial processes. A significant challenge that the solar industry faces is to increase the awareness of the possibilities of solar process heat. It is standard practice to install solar thermal systems in private households to provide warm water and support the heating system but on the other hand, there are only a few example installations used for industrial applications. The positive potential of using thermal solar energy is simply not considered frequently enough. Utilization ratios — the proportion of solar radiation reaching a collector’s surface that can be converted to usable process energy — of over 60% can be obtained by integrating solar thermal equipment in industrial systems. By comparison, photovoltaic systems typically have an efficiency of around 15%.

Fresnel collectors are especially appropriate for the generation of process heat due to their high surface efficiency, suitability of installation on flat roofs and low operating costs.

Solar process heat in the CPI

A large proportion of industrial process heat overall is located within the temperature range that can be obtained by using solar thermal collectors. The theoretical potential of solar process heat in the European Union can be seen from breakdown shown in Figure 2. 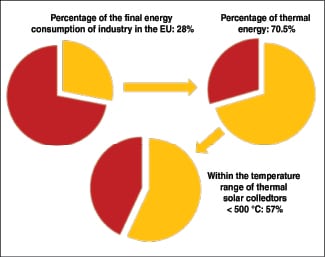 About 628 TWh are used for processes by the chemical industry in Europe annually [ 4]. This roughly corresponds to the energy generated by 60 nuclear power stations within one year. A large part of this energy is needed in the form of thermal energy.

Almost 43% of the thermal processes in the chemical industry are carried out below 500°C [ 5] and, by taking into account the economic and technical feasibility, can be partly powered with solar thermal collectors.

As an example, there are many locations where solar thermal technology can be used for distillation processes and for the manufacture of polypropylene. Due to the possibility of direct evaporation, commercially available Fresnel collectors are especially suitable for integrating into these processes.

Technology. Using an array of mirrors, Fresnel collectors concentrate sunlight onto an absorbing tube (Figure 3) and generate thermal energy within the range of 100 to 400°C.

Figure 3. Direct solar radiation is concentrated onto an absorber tube by mirrors

The collector system can be used over a wide power range using modular techniques. It can be flexibly integrated into existing steam networks.

Fresnel collectors are used for very different processes. A recently commissioned system heats a drying oven of a paint shop used in the automobile industry. Such paint shops offer an enormous potential for reducing energy costs. One system uses about as much energy as a small city with 50,000 inhabitants.

In order to use thermal solar energy, sufficient surface area is necessary to expose the collector to the sun. For industrial plants, it is often the case that more energy is required than the amount of solar radiation energy that can be obtained from the available roof area. Solar thermal energy and especially Fresnel collector installations are favored because, by comparison, a higher level of usable surface area is obtained.

For example, to achieve a maximum output of about 10 MW, an area of approximately 20,000 m2 is required for a Fresnel collector, whereas a parabolic trough collector would require approximately 1.5 times more area for the same output.

Economics. Long-term investments, such as those for buildings or energy systems, have a very low risk profile. Simultaneously, and over a long period of time, they can save money or rather generate it.

In order to obtain a meaningful evaluation of such an investment it is also necessary to consider them over a long time period. Usually, the internal rate of return (IRR) is used as a criterion for assessing the economic viability of an investment. For a typical process-heat system with Fresnel collectors from the authors employer, an IRR of between 5 and 30% can be achieved according to current energy prices, the predicted rate of inflation for energy and the lifespan of the system (Figure 4). 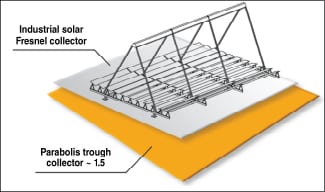 Figure 4. The diagram illustrates the ratio of the area required by different systems for the same output. Parabolic-trough collector systems require a surface area around 1.5 times greater than Industrial Solar’s Fresnel collector system

Industrial companies usually opt for investments that relate to their core business and they avoid tying up capital over several years in peripheral investments. “Contracting” is an obvious solution in this case. This provides investors with safe and profitable investment opportunities and enables the company to obtain process heat for a low price from the beginning when the solar plant is operational.

The prices for conventional energy sources that are replaced by solar energy are important for the economic efficiency. Depending on the location, fossil fuels are heavily subsidized by the government and retail prices sometimes are even below their extraction and processing costs. In areas where fossil fuels are less subsidized, solar energy can be utilized to provide an even higher financial benefit.

Related Content
Heat or cool fibrous sludge with this tube-in-tube heat exchanger
This new tube-in-tube heat exchanger is designed for heating and cooling sludge that contains fibers and particles, making this equipment…
A new tantalum line of heat exchangers for corrosive service
Last month, Alfa Laval AB (Lund, Sweden; www.alfalaval.com) introduced a new range of tantalum heat exchangers that offer the corrosion…
The New Face of Heat Exchangers
When it comes to heat exchangers, chemical processors have a lot to consider. The most common concerns include fouling, heat-transfer…
Use this compact heat exchanger for high-pressure dry-gas seals
The new Hydrosafe indirect electric heat exchanger is a complete thermal system designed for use in the harsh environments found…
Understanding Finned Heat Exchangers
Solid and serrated fins (Figure 1) are widely used as heat transfer surfaces in boilers and heaters. The use of…