Follow this guidance to improve the operation, safety and reliability of rotating machinery in chemical process plants Troubleshooting problems in rotating machinery (such as compressors, pumps, steam turbines, gas turbines, turbo-expanders and more) can present difficult challenges during day-to-day operations in facilities throughout the chemical process industries (CPI). Reliable operation is an important factor in keeping plants running, particularly as plants push to operate at higher capacities. Lost profits due to persistent machinery problems can never be recovered. Rotating machinery often presents the most difficult operational problems in a CPI plant. This article provides a practical, in-depth review of the art and science of machinery troubleshooting and problem solving. Five case studies are presented to cover a variety of relevant rotating-machinery systems, such as compressors, pumps, gas turbines and steam turbines. All of the case studies presented here were developed from actual field experience. This article offers a broad working knowledge of troubleshooting principles and practice, to help operators gain insight into different techniques and various methods for machinery problem solving. 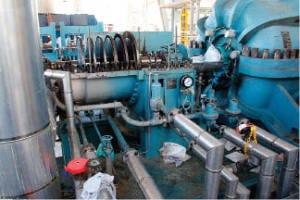 FIGURE 1. Shown here is a steam turbine dismantled for repair. This is the driver of the centrifugal compressor

A systematic approach is the key for solving any machinery operational problem. Comprehensive machinery assessments should be carried out using advanced data-collection tools and methods (Figure 1). For instance, the use of automated machine-data-collection software — which automatically collects a wealth of information specific to the machinery component — coupled with sophisticated modeling techniques, can provide great insight to support troubleshooting efforts related to complex rotating machinery. Such insight can help operators to diagnose the actual root causes of underperforming machinery and premature machinery failures. When CPI operators rely too heavily on alarms and trips, there is limited time to take remedial action in response to a machinery issue. Instead, a proactive monitoring approach provides greater value, by enabling earlier machinery troubleshooting through improved early detection of unusual deviations. This can provide an earlier indication of problems that may be developing. In modern operations, expert operators often opt to manage critical machine components using time-based data trends. Useful trends can be developed when the behavior of individual performance variables, such as pressure, temperature, flow, lubrication oil characteristics and more, are plotted over time on a graph. These trends can then be analyzed in conjunction with additional information, such as that derived from alarm screens and plant control-system graphics. By monitoring trends, operators can anticipate potential problems and propose smart solutions before any major upset occurs. Trends in relevant data can support operators and machinery engineers, allowing them to stay aware of situations as they begin to arise, diagnose the root cause of problems and resolve abnormal situations. The ability to gather and analyze trend data can also help operators to compare past and present behavior, thereby supporting efforts to anticipate future changes.

Keep an eye on key variables 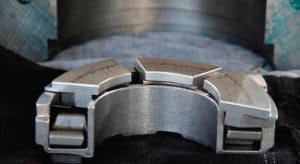 FIGURE 2. Tilting pad thrust bearings are widely used in relatively high-speed rotating machinery. These bearings are vulerable and can be damaged easily; shown here is one that was removed for repair

Vibration monitoring is an important indicator that can help operators to identify machinery problems at an early stage. The location of vibration sensors is vital, to avoid introducing errors during the measurement. In general, the best location for vibration sensors in rotating machinery is at the bearing or bearing housing (Figure 2). Vibration measurements at the machinery casing, in addition to bearing vibration, can provide useful data for identifying and solving machinery problems. However, monitoring vibration alone is not sufficient to gauge the health of rotating machinery especially when large, critical machines are concerned. For instance, in a recent case, it was observed that one electric motor’s temperature and current increased when the machine was overloaded — well before any vibration was detected. This underscores the importance of monitoring other parameters (such as temperature and current), in addition to vibration, to allow for early fault diagnosis of electric machines. When vibration analysis is used alone, it may be difficult to establish the real cause of the vibration. In general, it is better to monitor both vibration and overall machinery performance (such as delivered pressure and flow in pumps or compressors) to obtain a more reliable fault diagnosis. And, it is important to realize that the vibration produced by the machinery is not a fault on its own — but rather a symptom (and early warning sign) of a developing failure condition. Temperature is another critical variable, and the ability to monitor it accurately is of paramount importance in CPI plants. Today, a wide range of temperature sensors and measurement systems exists, including thermocouples, resistance thermal detectors (RTDs; also known as resistance thermometers), thermistors, filled thermal systems, pyrometers, infrared thermography techniques and glass thermometers. All are widely used to provide process and machinery temperature measurements. The measurement of flowrate provides another useful indicator for the health of many processes and machinery systems. Traditionally, techniques based on differential pressure, turbine and vortex shedding have been used to measure fluid flowrate. However, these methods might not be suitable if an accurate measurement is required for gases, since errors can be introduced in the measurement due the compressible nature of gases. To use these methods with gas flows, it would be necessary to compensate for the gas density fluctuation in order to reduce the errors. Modern Coriolis mass flowmeters are a more appropriate choice for measuring gas flowrate, which is usually independent of temperature, pressure, density and composition. This meter uses the Coriolis effect to measure the amount of mass moving through the element. In a simple form, the fluid to be measured runs through a U-shaped tube that is caused to vibrate in a perpendicular direction to the flow. Fluid forces running through the tube interact with the vibration, causing it to twist. The greater the angle of the twist, the higher the flow. These flowmeters have no rotating parts. Modern Coriolis flowmeters are highly accurate (providing accuracy to around±0.5% of the mass flowrate). For relatively low-speed rotating machines, vibration analysis may not be suitable to detect degradation or operational problems. However, acoustic-emission sensors, strategically located on the machine, can give operators early indication of deterioration in the machine’s operating condition. Control valves are vital components in every process and in many types of equipment packages where fluid is handled and regulated. However, the most common malfunction with control valves is internal leakage, which cannot be detected easily. Internal leakage can result from one of several factors, including an eroded valve plugs or seats, or insufficient seat load.

The importance of monitoring

In one situation, a CPI company avoided an estimated $10 million in property damage and business-interruption loss in a year as a result of the early detection of high vibration levels in its rotating machinery. The high-vibration monitors indicated the deteriorating conditions (a developing problem) within a large, critical compressor train. The developing problem resulted in the loss of half of the bolts, a circumferential crack in the coupling spacer (about 80 mm long) and a radial crack emanating from the initial break at the time of shutdown.

If the fault had progressed and all of the bolts had sheared before operator intervention, the compressor would have been unrestrained — with potentially disastrous consequences. This clearly illustrates why, particularly in large CPI plants, it is vital to monitor critical components on a continuous basis.

Case study 1: Insects in an air-compressor inlet filter. In a CPI plant in a remote area, insects caused problems for the inlet-air filtration unit of a large process-type air compressor. The accumulation of insects on the filters led to high differential pressure in the unit, leading to periodic compressor shutdowns. Multiple cases of surge and surge-related trips occurred because of this issue. Regarding a problem of persistent insects impacting the air-compressor, two solutions should be considered:

Usually one or more of the following issues are reported for steam-admission valves:

Based on the steam-turbine manual for this unit, the governor should only be opened to around 78% for the first normal operating condition case. The investigation showed the position indicator on the governor was at 90% for this operating case (around 12% discrepancy). The initial suggestion was that the governor or steam-admission valves might not be correctly calibrated. The physical movement of the admission valves has not changed since commissioning, which indicated that the problem was not related to the gradual build-up of deposition or to degradation. A highly nonlinear relationship was reported at low valve-opening positions (around 0–20% of the rated flow). Below 20% of the governor position, there was very little steam flow through the steam turbine. This indicated that there was a problem with the first poppet valve. There was almost zero increase in the steam flow once the governor position got higher than 91% of the rated flow. This was evident from the sharp drop-off at the end of the stroke-versus-steam-flow curve of the admission valve. There was also a problem with the last poppet valve. In other words, the lack of response during the first 20% of governor opening indicated a problem with the first poppet valve. The lack of response to the final 9% of governor opening indicated a problem with the last poppet valve. The steam-admission valve was overhauled for quick replacements of the first and last valves. The steam turbine operation has been satisfactory after this valve change. Edited by Suzanne Shelley

Related Content
Turbo blowers added to this company’s product portfolio
This company has added PillAerator turbo blowers (photo) to its line of rotary-lobe and rotary-screw blowers. This action significantly expands…
Air Movers for Dilute-Phase Pneumatic Conveying
Selecting the best air mover for a bulk-solids pneumatic-conveying application is a critical design decision. Provided here is information on…
A new size added to this compressor family
The Delta Screw compressor now has a new model — the VM 100 compressor package (photo) increases the E-Compressor series…
Field Performance Testing for Centrifugal Compressors
Determining the field performance of centrifugal compressors can benefit operation and maintenance of the equipment. Presented here is an overview…
These compressors are designed to reduce energy use
The new SM 7.5, SM 10, SM 15, and SFC 8 rotary-screw compressors (photo) have been redesigned to reduce energy…