Traditionally, cyanide consumption with conventional bio-oxidation residues is higher than with residues produced through other oxidative technologies. The Outotec MesoTherm BIOX process, based on its proven mesophile BIOX process, offers an easy, cost-effective upgrade path that can cut cyanide consumption by as much as 50% compared to conventional bio-oxidation, says Jan van Niekerk, director, Gold Process Solutions, Metso Outotec Corp. (Espoo, Finland; www.mogroup.com). The formation of thiocyanate — a common and stable cyanide species traditionally formed as a further byproduct — is also reduced by more than 50%, he says.

In the complete process (flowsheet), fresh concentrate slurry — which contains gold, sulfide minerals (such as pyrite and arsenopyrite) and gangue minerals (such as silicates or dolomite) — process water and some nutrients are fed to the mesophile stage. There, bacteria oxidize some of the sulfide minerals, releasing iron, arsenic and sulfate into solution (the gold remains inert). This partially oxidized slurry is fed to an interstage thickener to remove some dissolved species prior to the thermophile stage. The partially oxidized solids are pumped to the thermophile reactors, where the sulfide is further oxidized to achieve near 100% oxidation, explains Van Niekerk. The BIOX product then undergoes a three-stage, counter-current decantation (CCD). The washed oxidized solids from the final CCD thickener are then pumped to the leaching section (carbon in leach; CIL), where cyanide is added to dissolve the liberated gold.

The new process is currently being implemented at the Fairview BIOX plant in South Africa, where the mine has converted one of its secondary mesophile reactors into a thermophile reactor. This reactor was operated as a production reactor, as part of the process. The plan is to convert more of the secondary reactors to thermophile reactors over time, says Van Niekerk. 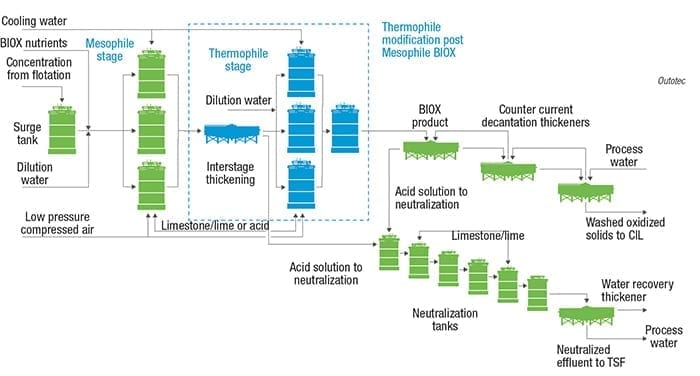 Related Content
Metals from nodules on seabed offer environmental advantages
Small-scale pilot testing has begun for a process that extracts nickel, manganese, cobalt and copper from nodules collected from the…
Extracting gold without cyanide
The first gold using a process without cyanide and without mercury has been produced using technology from CSIRO Minerals Technology…
Extremophilic algae selectively recovers precious metals from solution
The research group of Ayumi Minoda at the University of Tsukuba (Japan, plmet.biol.tsukuba.ac.jp) has discovered that the cellular surface layer…
Commercial plant will recover salts from incinerator flyash
Ragn-Sells AB (Sollentuna, Sweden; www.ragnsells.com) has partnered Hitachi Zosen Inova AG (Zürich, Switzerland; www.hz-inova.com) for the construction of a new…
Italian industry-academic collaboration yields prototype machine for making new masks
The Marchesini Group S.p.A. (Pianoro Bologna, Italy; www.marchesini.com) and a multidisciplinary research group at Bologna University (www.unibo.it) have created a…