In August, Synhelion S.A. (Lugano, Switzerland; www.synhelion.com) became the first company in the world to produce synthesis gas (syngas) on an industrial scale using only solar heat as an energy source. The milestone occurred on the multifocus solar tower of the German Aerospace Center (DLR; Cologne, Germany; www.dlr.de) in Jülich, Germany. This demonstration was the last technical milestone to overcome for the industrial production of carbon-neutral jet fuels. 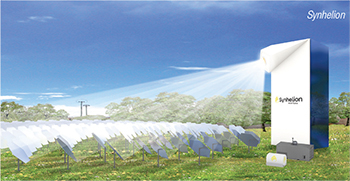 The Synhelion team was able to successfully produce solar syngas for the first time in the ETH Zurich laboratory back in 2010. Since then, the challenge has been to scale up the technology to an industrial scale. A cooperation with John Wood Group plc (Wood; Aberdeen, U.K.; www.woodplc.com) has significantly accelerated this technical development. Wood supplies Synhelion with its proprietary reforming reactor in which the syngas is produced. Synhelion now powers this reactor exclusively by solar process heat. To do this, solar radiation is concentrated by a mirror field onto the solar receiver developed by Synhelion in the multifocus solar tower. The tower and the mirror field in Jülich belong to the DLR; the precise mirror-field control technology was developed and installed by Synhelion Germany. Specifically, a 250-kW receiver from Synhelion was coupled with a 6-m-high, 12-ton reforming reactor at the plant. The system has a production capacity of 100 Nm 3 /h. Accordingly, a plant of this size could produce about 150,000 L/yr of liquid solar fuel.

Since then, a groundbreaking ceremony last month officially marked the start of construction on the world’s first industrial-scale solar-fuel plant, also in Jülich, which will demonstrate the entire process — from concentrated sunlight to liquid fuels — on an industrial scale. The DAWN plant is being implemented as part of the SolarFuels project, which is funded (€3.92 million) by the German Federal Ministry for Economic Affairs and Climate Action (BMWK). The plant is expected to be commissioned as early as 2023, and Swiss International Air Lines will be the first airline to use the solar kerosene produced by the plant. The demonstration plant will also serve as a model for future commercial plants. By 2030, Synhelion aims to reach a production capacity of 875 million L/yr of fuel in future commercial plants.