To avoid problems with solids flow in bins and hoppers, the friction between the equipment walls and the flowing solids is an important factor to understand. Provided here is a review of flow patterns in bins and hoppers, and practical design considerations for overcoming challenges related to wall friction.

In the past, bins and hoppers were typically designed primarily from an architectural or fabrication standpoint (for instance, hopper walls were sloped 30 deg from vertical to reduce the waste of wall materials, or 45 deg to minimize headroom requirements and simplify design calculations). However, experience has shown that designing equipment without regard to the actual bulk materials being handled often leads to flow problems, such as arching, ratholing, erratic flow and even no flow. By measuring the flow properties of a bulk solid, including wall friction, the flow behavior of the material can be predicted, and more reliable hoppers and bins can then be designed. 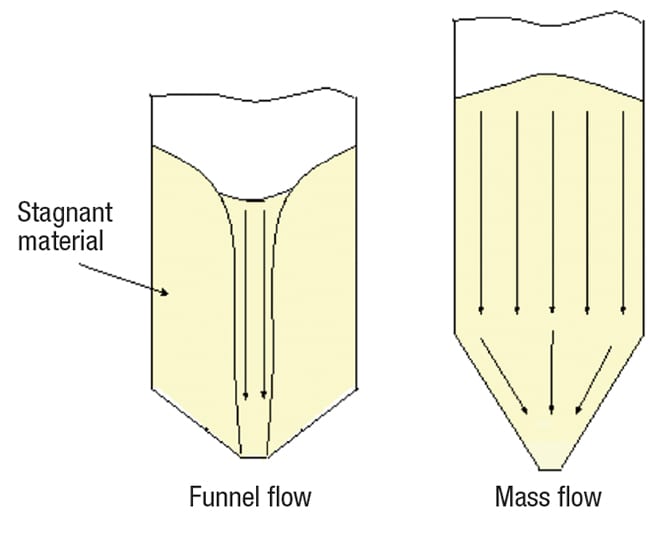 Two types of bin flow patterns are possible when solid material is discharged from a hopper, bin or silo (Figure). A mass-flow bin has a relatively long, tapered discharge section. In mass flow, all of the material is in motion during discharge, so no stagnant regions form. Conversely, a funnel-flow bin has a relatively short converging section. While storage capacity for a given height is greater in a funnel-flow bin, this geometry allows material in the center to move while material at the walls is stationary. The resultant stagnant regions may interrupt flow.

The test method for wall friction measures interfacial friction between the powder sample and hopper wall material at increasing consolidation stresses. The test is performed using an instrument that involves placing a sample of powder inside a retaining ring on a flat coupon of wall material. Various normal loads are then applied to the powder, and the powder inside the ring is forced to slide along the stationary wall material. The resulting shear stress is measured as a function of the applied normal stress.

The materials of construction used to simulate the surface are based on actual hopper design — instrument vendors provide a range of different grades of steel and plastic routinely used in hopper construction.

The coefficient of sliding friction is the ratio of the shear force required to cause sliding, to the load applied perpendicular to the plate surface. The arctangent of this value is the wall-friction angle.

Wall-friction angles above 30 deg are considered high, and may lead to flow difficulty in powders. Wall-friction results can help determine the recommended hopper angle to ensure mass flow.

The following variables can affect the internal and external friction values of a bulk solid and are similar to those affecting cohesiveness:

Particle size and shape. Typically, fine materials are somewhat more frictional than coarse materials, so their flow is often more troublesome. Particle shape plays a role also, in that angular particles tend to interlock with each other and also dig into a wall surface, thereby creating more friction.

In cases where powder frictional properties dictate hopper designs that are impractical, alternative options for finding solutions to flow problems could include changes in hopper wall material or an increase in cleaning frequency for the hopper surface. Another approach for improving flowability is to incorporate additives into the powder formulation. Similarly, mechanical-assist devices, such as vibration and aeration, are other possible considerations. Trade-offs must be evaluated between the cost of these interventions versus the consequences of the lost processing time due to flow stoppages related to equipment downtime or poor product that requires rework.

Editor’s note: The information found in this column was obtained from the following articles:

Related Content
Focus on Solids Handling
This bag slitter eliminates dust and reduces waste The MINILux (photo) is an automated food-grade bag slitter constructed to U.S.…
Refining Powder-Testing Practices
A rigorous and structured approach to determining the potential value of powder testing techniques in solids-handling applications can improve powder…
Facts At Your Fingertips: Flexible Intermediate Bulk Container (FIBC) Basics
Flexible intermediate bulk containers (FIBCs), sometimes known as bulk bags, are widely used in the chemicals, pharmaceuticals, food, agriculture and…
Understanding Attrition in Solids Processing
Better qualitative and quantitative understanding of the mechanisms of particle breakage at the level of the particles, the bulk material…
Facts At Your Fingertips: Design Considerations for Pneumatic Conveying
Attention to the design of bulk-solids pneumatic-conveying pipelines can help avoid conveying-system problems, such as low conveying rates, plugging, excessive…