Store acids safely in the laboratory with these cabinets
The Acid Storage Cabinet (photo) is designed for the storage…
Highlights Feeling video fatigue?Focus on AnalyzersOperational Best Practices for Rotary DryersFacts At Your Fingertips: Microbial-Influenced CorrosionThe 2021 Kirkpatrick Award: Call for nominations

Supercritical carbon dioxide is an attractive alternative in place of traditional organic solvents. CO2 is not considered a VOC. Although CO2 is a greenhouse gas, if it is withdrawn from the environment, used in a process, and then returned to the environment, it does not contribute to the greenhouse effect. There have been an increasing number of commercialized and potential applications for supercritical fluids. This article summarizes the fundamentals of supercritical CO2 properties and processing, and presents a number of current and potential applications.

Above its critical values, a compound’s liquid-vapor phase boundary no longer exists and its fluid properties can be tuned by adjusting the pressure or temperature. Although supercritical fluid has liquid-like density, it exhibits gas-like diffusivity, surface tension and viscosity. Its gas-like viscosity results in high mass transfer. Its low surface tension and viscosity lead to greater penetration into porous solids. Because of its liquid-like density, a supercritical fluid’s solvent strength is comparable to that of a liquid.

At critical conditions, the molecular attraction in a supercritical fluid is counterbalanced by the kinetic energy. In this region, the fluid density and density-dependent properties are very sensitive to pressure and temperature changes. The solvent power of a supercritical fluid is approximately proportional to its density. Thus, solvent power can be modified by varying the temperature and pressure. Because their properties are a strong function of temperature and pressure, supercritical fluids are considered tunable solvents. In contrast, conventional liquid solvents require relatively large pressure changes to affect the density.

Unlike many organic solvents, supercritical CO2 is non-flammable. It is inert, non-toxic, has a relatively low cost and has moderate critical constants. Its solvation strength can be fine-tuned by adjusting the density of the fluid. CO2 leaves a lower amount of residue in products compared to conventional solvents, and it is available in relatively pure form and in large quantities.

CO2’s critical temperature (Tc; 32.1°C) is near ambient, making it an attractive solvent for temperature-sensitive materials. CO2’s critical pressure is 73.8 bar (Pc; 1,070 psi), as shown in its phase diagram (Figure 1). 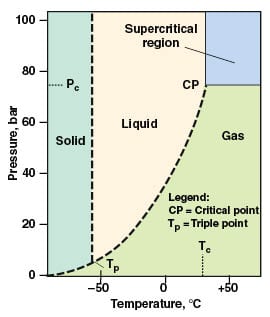 CO2 as a solvent. Supercritical CO2 is a good solvent for many nonpolar, and a few polar, low-molecular-weight compounds. It is not a very good solvent for high-molecular-weight compounds and the majority of polar compounds. Uneconomically high process pressure may be required to solvate polar, inorganic or high-molecular-weight material in CO2. To increase the solubility of such compounds in supercritical CO2, small amounts of polar or non-polar co-solvents may be added. Highly CO2-soluble surfactants and CO2-phillic ligands have also been developed to improve the solubility of compounds in CO2.

Conventional processes for extracting various components from food products have limitations regarding the solvent toxicity, flammability and wastefulness. This area is where early commercial applications of supercritical CO2 were focused. The relatively low critical temperature and low reactivity of CO2 allow extraction without altering or damaging the product. Decaffeination of coffee was one of the first processes commercialized using supercritical CO2. Prior to the use of supercritical CO2, several different solvents including methylene chloride, ethyl acetate, methyl acetate, ethylmethylketone and trichloroethane have been used for decaffeination. Extraction of hops during the beer brewing process is another area where CO2 is used.

The feed material is typically ground solid material, which is fed to the extractor. Most commercial operations for supercritical fluid extraction are batch or semi-batch operation especially when the feed material is solid. For liquid feed material, the extraction occurs in a countercurrent column filled with random or structured packing material. However, for highly viscous liquid feed, the viscous liquid and supercritical fluid may be mixed and sprayed through a nozzle into the extractor vessel.

Recent extraction applications. There has been a great deal of interest in supercritical CO2 extraction beyond caffeine extraction, particularly in the preparation of high value products, such as flavors and fragrances, food supplements and nutraceuticals.

Specialty oils, for example, are high in value and typically low in volume. They have high concentrations of bioactive lipid components that are valued because of various possible health benefits. Herbal extracts from a wide range of botanical raw materials are used as ingredients to the food-and-flavor, nutraceuticals, pharmaceuticals and the cosmetics industries. Supercritical CO2 extraction can also be used to purify materials that are used for the production of medical devices.

These high-value-product applications typically involve small volumes. Flexible, medium-capacity plants for supercritical CO2 extraction offer toll processing for these smaller volume products. The most important driving force for using supercritical CO2 in this application area is that it is a generally recognized as safe (GRAS) solvent that leaves no traces in the product. GRAS is the U.S. Food and Drug Admin. (FDA) designation that a chemical or substance added to food is considered safe by experts, and, therefore, is exempt from the usual Federal Food, Drug, and Cosmetic Act (FFDCA) food additive requirements.

Another method to extract multiple products is by sequential depressurization, in which all products are extracted simultaneously. The separation step is performed sequentially through a series of separator vessels. This process is referred to as fractional separation.

A wide variety of applications

Supercritical CO2’s use in extraction processes has grown fairly quickly. In fact, extraction of food and natural products using supercritical or liquid CO2 can be considered a relatively mature CO2 technology. A wide range of other applications for supercritical CO2 has been investigated, including chemical reactions, polymer production and processing, semiconductor processing, powder production, environmental and soil remediation and dry cleaning. Commercialization for these applications has, however, proceeded at a slower pace than for extraction. Several of these applications are highlighted here.

Chemical reactions. Supercritical CO2 has been tested in a variety of industrially important reactions, such as alkylations, hydroformylations, and hydrogenation, as an alternative reaction medium. The incentives to use supercritical CO2 as reaction medium can include (a) replacement of the conventional organic solvent with a “green” solvent, (b) improved chemistry such as reactivity and selectivity, (c) new chemistry, and (d) improved separation and recovery of products and catalysts. Relatively high rates of molecular diffusion and heat transfer are possible with a homogenous, supercritical-CO2 reaction-medium.

Limitations to the use of supercritical CO2 as a reaction medium include (a) poor solubility of polar and high-molecular-weight species, (b) no observed improvement in reaction chemistry in some cases, and (c) higher capital investment cost due to higher operating pressures. For reactions not limited by reactant-gas concentrations or other mass-transfer limitations, there is no improvement in reactivity observed when using a homogeneous, supercritical CO2 medium.

At moderate pressure, very few polymers, except for certain amorphous fluoropolymers and silicones, show any significant solubility in CO2. Very high pressure is typically needed to dissolve polymers in supercritical CO2. Its solvent power is weaker than that of n -alkanes. However, high degrees of swelling of the polymer by CO2 can occur at significantly lower pressure. Although many polymers have very low solubility in CO2, the solubility of CO2 in polymers is typically high. This has led to the use of CO2 as a plasticizer.

Semiconductor processing. Currently, chip manufacturing involves many wet-chemical processes that use hydroxyl amines, mineral acids, elemental gases, organic solvents and large amounts of high purity water during chip fabrication. One potential application is the use of supercritical CO2 in wafer processing. The low viscosity and surface tension of supercritical CO2 allow for efficient cleaning of small feature sizes, which is of great importance with the continued miniaturization of integrated circuits. However, the main obstacle to the use of supercritical CO2 in semiconductor cleaning is the high cost.

Powder production. One promising application for supercritical CO2 is the production of micro- and nano-scale particles. The pharmaceutical industry currently uses supercritical CO2 mainly to control the powder particle size of products during synthesis. In the 1990s, a U.K.-based company, Bradford Particle Design (now Nektar), developed the Solution Enhanced Dispersion by Supercritical Fluids (SEDS) system to control powder formation from a diverse range of chemicals, including inorganic and organic substances, polymers, peptides and proteins. The use of supercritical CO2 for micronization of pharmaceutical compounds has several potential advantages over conventional techniques such as spray drying, jet milling and grinding. These advantages include minimum product contamination, reduced waste streams, suitability for the processing of thermally, shock or chemically sensitive compounds and the possibility of producing particles with narrow size distribution in a single-step operation.

This article has been excerpted by Dorothy Lozowski from a 223-page report by Susan Bell of SRI Consulting. For details on how to order the full report, contact the author using the contact information on p. 15.


Related Content
Challenges of Handling Filamentous and Viscous Wastewater Sludge
Excessive growth of filaments and biopolymers in activated sludge should be controlled in CPI wastewater-treatment plants, as both lead to…
Improving mass-transfer-limited reactions
The step-by-step procedure described here can help operators to optimize reactor operation and output Engineers throughout the chemical process industries…
Propylene via Propane Dehydrogenation (Oxydehydrogenation)
Propylene is a major component of the global olefins market and is widely used as an intermediate for an array…
Polypropylene Production via Gas-Phase Process
Polypropylene (PP) is one of the world’s most widely used polymers, second only to polyethylene in terms of global…
A new anionic surface-sizing agent
Basoplast 450 P is a new and highly cost-efficient polymeric surface-sizing agent (PSA) for the packaging sector. The product is…