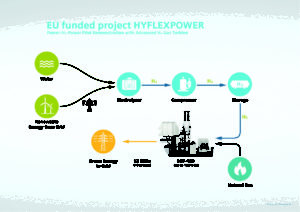 With the HyflexPower project, a consortium — made up of Engie Solutions (Paris, France), Siemens Gas and Power GmbH & Co. KG (Munich, Germany), Centrax Ltd. (Abbot, England), Arttic, German Aerospace Center (DLR; Cologne, Germany) and four European universities — is implementing a project funded by the European Commission under the Horizon 2020 Framework Program for Research and Innovation (Grant Agreement 884229). The implementation of this project, the world’s very first industrial-scale power-to-X-to-power demonstrator with an advanced hydrogen turbine, will be launched at Smurfit Kappa PRF’s site — a company specialized in manufacturing recycled paper — in Saillat-sur-Vienne, France. The purpose of this project is to prove that hydrogen can be produced and stored from renewable electricity and then added with up to 100% to the natural gas currently used with combined heat and power plants. For this an existing Siemens SGT-400 industrial gas turbine will be upgraded to convert stored hydrogen into electricity and thermal energy.

Through its Horizon 2020 framework program the European Commission supports highly innovative research and demonstration projects aiming at developing and creating innovative products and services and thus stimulating growth in Europe. For this, the European Commission is awarding grants in a competitive procedure in which HyflexPower was able to assert itself against a large number of competitors.

With this particular project, HyflexPower will demonstrate that renewable hydrogen can serve as a flexible means of storing energy which can then be used to power a high-power industrial turbine.

Storing fluctuating renewable energy is one of the major challenges of the energy transition. In this context, the stakeholders involved in the HyflexPower project are developing new technologies which can be used across the whole power-to-X- to-power cycle. The installed demonstrator will be used to store excess renewable electricity in the form of green hydrogen. During periods of high demand this stored green hydrogen will then be used to generate electrical energy to be fed into the grid.

Engie Solutions has been entrusted with producing energy at the Smurfit Kappa site in Saillat-sur-Vienne, France. At the site, Engie Solutions operates a 12 MWe combined heat and power facility which produces steam for the manufacturing company’s requirements. The conversion of an existing infrastructure has the advantage of significantly lower costs and minimized lead time compared to a greenfield site. The project will develop and demonstrate an advanced plant concept that will contribute to modernizing and improving the factory’s existing power plant.

During two demonstration campaigns, the facility will be powered by a mix of natural gas and hydrogen, ultimately aiming for up to 100% hydrogen operation. In this regard, the overall goal of the HyflexPower project is to test an entirely green hydrogen-based power supply for a completely carbon-free energy mix. This would save up to 65,000 tons of CO2 per year for a SGT-400 at baseload operation.

The consortium selected following the call for proposals is made up exclusively of European companies and bodies. Each stakeholder’s role is defined as follows:

– Engie Solutions will build the hydrogen production and storage facility, including the natural gas/hydrogen mixing station prior to the turbine

– German Aerospace Center (DLR) together with the University College London, University of Duisburg-Essen and Lund University will support the hydrogen turbine technology development

– National Technical University of Athens will perform economic, environmental and social assessments of the concept

– Arttic will support the operational project management and the project’s communication activities.

The project’s total budget is close to €15.2 million, of which €10.5 million will be contributed entirely by the European Union under the Horizon 2020 program.

Officially launched on 1 May 2020, the project will last four years and will be split into several phases:

– May 2020: Contract finalization and start of engineering development.

– 2021: Installation of the hydrogen production, storage and supply facility at pilot demonstration site.

– 2023: Pilot demonstration with up to 100% hydrogen for carbon-free energy production from stored excess renewable energy.

This extremely promising technology is fully in line with Siemens, Engie Solutions and Centrax’ strategy of providing its clients with zero-carbon solutions.

Siemens Gas and Power helping to increase level of decarbonization

Siemens Gas and Power is helping its customers achieve their decarbonization goals by building infrastructure for power-to-X-to-power and making a global contribution to cross-sector decarbonization. Siemens offers all core technologies for a long-term CO2-free energy supply, from power and heat generation, to power transmission and distribution, and efficient electrolysis for hydrogen production.

“Siemens Gas and Power wants to be the driving force behind the decarbonization of energy systems worldwide,” says Karim Amin, CEO of the Generation Division of Siemens Gas and Power. “Our goal is to make our gas turbines usable for 100 percent hydrogen. With that, our gas turbines can be the “technology of choice” for our customers to complement the intermittence of renewables and ensure a secure energy supply in the decarbonized world of the future,” Amin added.

As an energy for the future, green hydrogen has a major role to play in the energy transition. For Engie Solutions, the most abundant element in the universe is vital to decarbonizing industrial processes.

Engie Solutions is certain that this energy will help speed up the transition of regions and manufacturing companies and is supporting the development of renewable hydrogen – it already has a number of projects, either in operation or forthcoming.

“With the HyflexPower project, Engie Solutions is once again demonstrating its intent to support manufacturers and regions as they seek to optimize and green their energy use. Developing renewable hydrogen for industrial purposes is a perfect example. This demonstrator is the future,” says Pierre Hardouin, CEO of Engie Solutions for Industries.

Centrax sees Green Hydrogen as an important part of the path to a decarbonized energy system and welcomes the considerable investment being made by the Horizon 2020 program to assist the development of Hydrogen compatible combustion systems.

“Our goal is for our gas turbine combined heat and power systems to be ‘Hydrogen Ready’ to provide future proof power generation solutions for our Customers,” says Harry Trump, director of Business Development for Centrax Ltd.