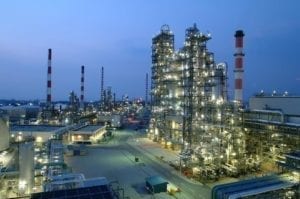 Located in HRC’s facility in Port Dickson, Malaysia, the modular Chlorsorb unit is the first retrofit in the world involving such a modular unit into an existing CCR Platforming unit.

The UOP Chlorsorb technology achieves up to 99% chloride removal efficiency, eliminates the need for caustic scrubbing, and reduces operating cost of a CCR Platforming unit. The technology was first commercialized in 1997 and today is operational in 95 units worldwide.

In addition to technology licensing, UOP delivered the technology in pre-fabricated equipment modules and upgraded the control system.

The UOP Chlorsorb technology is an alternative to traditional caustic scrubbing of chloride which is used to maintain dispersion of the Platforming catalyst during regeneration. As a result, it enables a refinery to eliminate the use and disposal of caustic and to significantly reduce consumption of organic chloride in the operation of a continuous catalyst regeneration, or CCR, system.